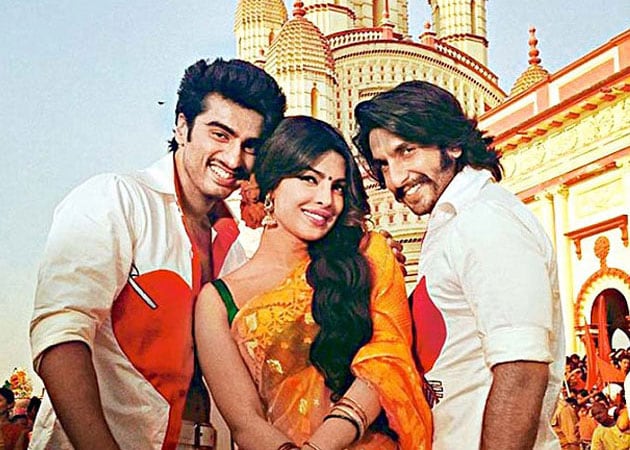 Composer: Sohail Sen
Singers: Javed Ali, Shadab Faridi, Vishal Dadlani, KK, Neeti Mohan, Bappi Lahiri, Arijit Singh, Neha Bhasin, Shahid Mallya, Altmash Faridi, Sohail Sen, Monali Thakur, Kinga Rhymes
Rating ***1/2
The music album of director Ali Abbas Zafar's forthcoming film Gunday is evidence of Sohail Sen's versatility.
Set in the 1970s, the soundtrack of the movie, which features Ranveer Singh, Arjun Kapoor and Priyanka Chopra in the lead roles, boasts of 10 tracks, including a rap, a classical and a Bangla version of Tune Maari Entriyaan.
It starts with the peppy, entertaining Jashn-e-Ishqa. Sung by Javed Ali and Shadab Faridi, it is an all-male number. It's a celebration of love, friendship and power. Whichever mood you are in, this will pep you up so much that you will automatically start jiving to the beats.
The second one is Tune Maari Entriyaan. Sung by Bappi Lahiri, KK, Neeti Mohan, and Vishal Dadlani, it will just blow you away with its beats and the right combination of voices.
Are you in love? If yes, Jiya is perfect for you. And in case you are not in a romantic relationship, then you would surely want to be in one after hearing the song in Arijit Singh's soothing and melodious voice. It strikes an instant chord with the listeners.
Next up is Asalaam-e-Ishqum. Sung by Bappi Lahiri and Neha Bhasin, it creates a retro and modern feel. The duo definitely takes the song to the next level. The next time you visit a discotheque, there is a huge possibility you will be welcomed by the song.
Saaiyaan is fifth on the list. Initially, it will remind you of Do Dhari Talwar from Mere Brother Ki Dulhan. A very soothing number sung by Shahid Mallya, it is all about heartbreak.
Next in line is Mann Kunto Maula. Amir Khusro's poem has been given a modern twist by Altamash Faridi and Shadab Faridi. The song stands out because of the use of the guitar that gives it a very modern feel.
The title track Gunday, which is placed seventh, is of 163 seconds and basically describes the two male characters in the movie. What makes the song perfect for the album is the rap by Kinga Rhymes.
Rhythm of Jashn-e-ishqa is not so appealing. There is nothing wrong with it, but such songs look effective when played during a dramatic scene in a movie.
Mann Kunto Maula (classical) is next. As the name suggests, it is a classical number and is more soothing than the original version. It will remind you of the spiritual number Kun Faaya Kun from Rockstar.
Tune Maari Entriyaan (Bangla version) wraps up the album. Sung by Bappi Lahiri and Monali Thakur, the lyrics are not very difficult to understand. It is high on fun and entertaining.
Overall, Gunday has songs for every mood and music lovers couldn't have asked for more.