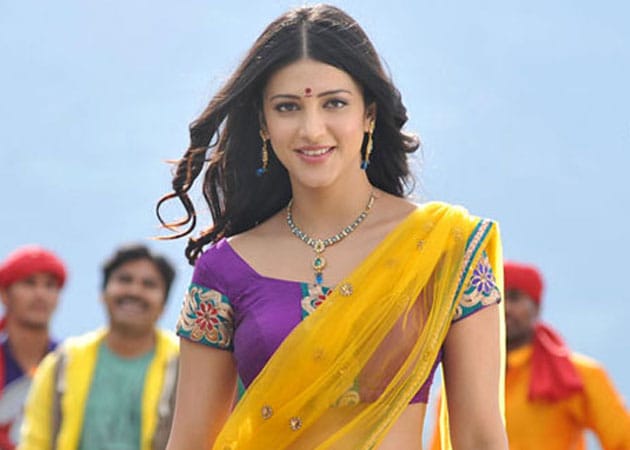 Shruti Haasan in a still from the movie Ramaiya Vasta Vaiya

The music album of director Prabhu Deva's Ramaiya Vasta Vaiya has six tracks and composer duo Sachin-Jigar has given elements of love and fun their due importance.

The music album of director Prabhu Deva's Ramaiya Vasta Vaiya has six tracks and composer duo Sachin-Jigar has given elements of love and fun their due importance. In short romantic songs are the highlights of the album.
Atif Aslam and Shreya Ghoshal sing the first track Jeene laga hoon beautifully. After a long time humming is made to sound so good in a song. The rhythmic number has a pure romantic feel to it. Shreya's voice is a treat for her fans but the song lacks grandeur. The simple love song has good lyrics.
"Hip hop beat" is next and, as the name suggests, it is a dance number. Singers Mika Singh and Monali Thakur have sung it in a way that the music's beats are highlighted well. The loud track talks about teasing a girl. After a point it becomes a regular track with all the music and the dhol sounds. Towards the end, the music, however, becomes really fast and brings the climax, which is an interesting turn for listeners.
Atif and Shreya again team up for yet another romantic number Bairiya. The song has a magical feel to it and the singers' soothing voices are mesmerising. It gradually changes pace as more instruments join in. Both singers take the song to another level, making it worth hearing.
Third in the line is "Peecha chutha" in Mohit Chauhan's crisp voice. The song is a rhythmic, happy track. Even though some may like the song, it may not have a long shelf life.
Atif and Shreya weave magic for the third time with another romantic number, "Rang lagyo". With good music, apt lyrics and rhythmic music, this one is the best so far. It has everything required in a love song and that makes it magical.
Item number Jadoo ki jhappi ends the album on a peppy note. The whistles, fast beats and fast music make it a perfect dance number. Neha Kakkar's voice gels very well with the composition and Mika later spices it up. Entertaining, but not an out of the box composition.
The music album of Ramaiya Vasta Vaiya scores average, with the only high point being the romantic numbers. It may or may not strike the right chord with the listeners on a larger scale.