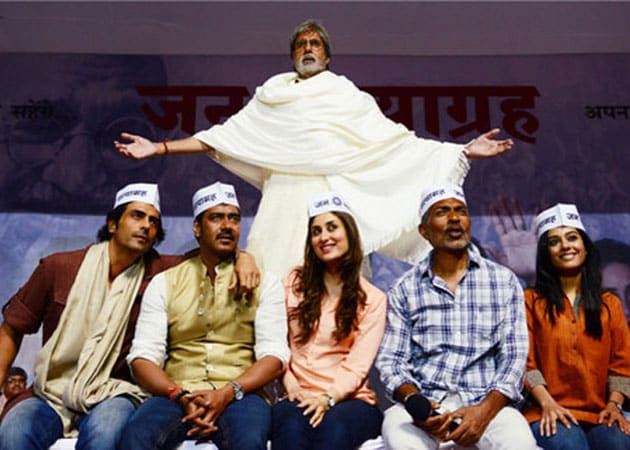 The music album of director Prakash Jha's Satyagraha boasts of seven tracks, including a remix and a house mix version of a track.

The music album of director Prakash Jha's Satyagraha boasts of seven tracks, including a remix and a house mix version of a track. Composer duo Salim-Sulaiman Merchant has kept the essence of the political thriller through a mixed bag of romantic and patriotic songs.
The title track Satyagraha leads the album with its high-on-energy music. Singers Rajiv Sundaresan, Shivam Pathak and Shweta Pandit's powerful rendition can give listeners goosebumps. The peaceful melody of the Raghupati Raghav hymn has been turned into this aggressive yet passionate song with commendable lyrics. The addition of rock music adds to the number. Thumbs up to this one!
Aiyo ji comes second in line. With the melodious Salim Merchant and Shraddha Pandit behind the mike, this one is an interesting contemporary track. It could have been a boring number, but its background beats save it. The lyrics have a sense of naughtiness, making it a perfect romantic number. A lot of special effects seem to have been added to the singers voices as well. This only adds to its beauty.
The remix of the number is a typical DJ version with more beats and fewer words. DJ Shiva does not bring anything new with the remix. Since the original is a slow romantic number, the fast-paced form lacks any chance of longevity of being played in discotheques.
Next on the list is Raske bhare tore naina. Sung by Shafqat Amanat Ali and Arpita Chakraborty, it is a perfect blend of Indian classical music with everything Bollywood. Shafqat once again proves his singing prowess, and Arpita's voice blends in very well. It has a little regional influence in the lyrics. Undoubtedly, one of the finest compositions of the album.
The house mix version of Raske bhare tore naina gives the original track a twist. Singer Aadesh Shrivastava's voice replaces that of Shafqat, but he sounds equally melodious. The house mix broadens the mass appeal of the song, especially for youth.
Energy and passion reach their peak with Indian Ocean members Rahul Ram, Himanshu Joshi and Amit Kilam jamming in the song Hum bhole the. The music attracts a listener more than the singers, and a roaring jugalbandi of sorts between the guitar and drums seem to emerge out of it, giving the number a certain level of aggression. A must hear.
Janta rocks is a good track; its peppy start can be misleading. The listener can lose interest after a bit as it is over seven minutes long. The lyrics are attention-grabbing and full of sarcasm, giving it a mass appeal, but even that fails to hold the listener's interest beyond a point.
Overall, the music of Satyagraha might not have a long shelf life, but it definitely leaves an impact on the listener.