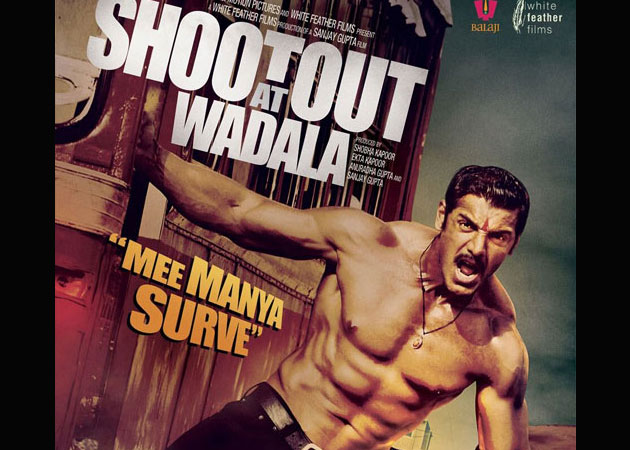 A poster of the movie Shootout At Wadala

Although director Sanjay Gupta's movie Shootout At Wadala is real life crime story, but he has packed in as many as 11 tracks, which include six songs and five remixes.

Although director Sanjay Gupta's movie Shootout At Wadala is real life crime story, but he has packed in as many as 11 tracks, which include six songs and five remixes.
Since the gangster drama is based in the late 1970s and early 1980s, some compositions have a classic touch. For instance, the trumpet is used extensively; reminisce the music of that era.
Babli badmaash, sung by Sunidhi Chauhan, kick-starts the album. The composition, picturised on Priyanka Chopra, takes you to the 1970s and the 1980s. Many would term it as an item number, but it is far from that, mainly because it avoids 'raunchy elements' that have become integral part of such tracks now. An expert in crooning such songs, Sunidhi beautiful adapts changing tempo of the composition while singing the song, which has sensuous lyrics thrown in here and there.
The remix of the song is by Gourav Das Gupta and Roshan Balu and they have turned it into a discotheque number.
The next is Laila. Even though it was in the news for featuring Sunny Leone, the song is definitely more than that. No one could have sung the song the way Mika Singh has. However, it would have been nice to have a female singer singing it. The cheesy song has a mass appeal, but it may not have a shelf life.
Once again, Gourav and Roshan team up for the remix version of the song. They introduce a lot of music and beats, which enhances Mika's voice and make it better than the original.
Next in the line is Ye Junoon. Sung by Mustafa Zahid, the song's lyrics bring in romantic flavour. The singer brings out all love-related emotions. In the slow number, orchestra gradually joins the singer. It could be described as a passionate song, with some parts expressing sadness too. A good hear for emotional people.
Mayur Sahni does the remix of the song and he brings in interesting change by adding echo effect. The remixed version sounds happier and more dramatic.
John Abraham plays gangster Manya Surve in the film and next song Aye Manya seems to introduce him in the movie. The drum-beats make it dramatic and grand, but they dominate lyrics, as a result emotions get buried under heavy sound. Sung by a team of singers - Adnan Sami, Meet Brothers and Shaan, it has nothing more to write home about.
Goli comes next. Mainly sung by Meet Brothers and Sudesh Bhosle, it is interspersed with a kind of rap by Anil Kapoor and John, which reflect the same style that one heard in the song "Ganpat" from "Shootout at Wadala". Focused on a bullet, it sounds hollow.
It has a remix by Mayur and he enhances the song to some extent.
Aala re aala, a mujra style song sung by Sunidhi, comes next and it once again takes you to the 1970s and 1980s. Later, Mika Singh goes behind the mic and joins Sunidhi in the typical cabaret number, which used to be a part of every underworld movies in those days. The lyrics bring on an element of mystery.
The remix of Aala re aala is again by Gourav and Roshan.
In short, Shootout At Wadala soundtrack is an interesting compilation. Although some tracks may have a short shelf life, others are interesting compositions to hear. The best part is that all the songs are in sync with the theme of the movie.