Pandit Ravi Shankar's Wife Sukanya Talks About Her Relation With Him 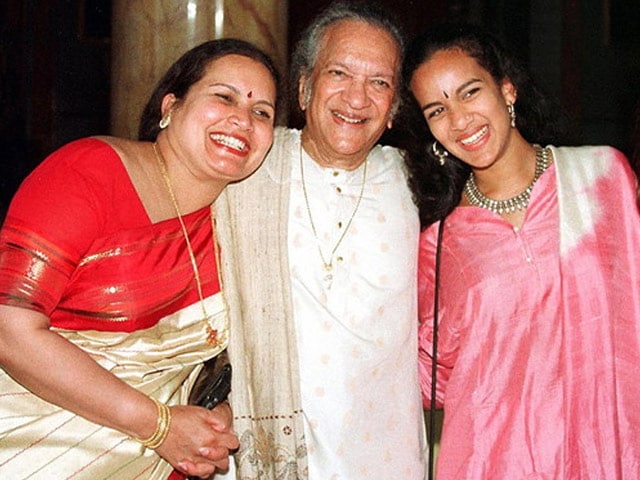 A file photo of Pandit Ravi Shankar with his wife Sukanya and daughter Anoushka.

"He never lied to me or hoodwinked me into anything. He was very clear from the beginning," she said

Pandit Ravi Shankar's magnificent life and music career will be celebrated on his 95th birth anniversary and his wife Sukanya is busy giving shape to a planned exhibition in Grammy museum, slated to open on April 29.
Ravi Shankar: A Life In Music will give music lovers a rare glimpse into the Grammy-winning sitar virtuoso's early life and his impact on world music.
"We have donated some 10 sitars, including one from the 1930s. There are many things, concert photos, hand-written letters and notes. I have been collecting stuff madly. It is one-of-a-kind exhibition and is open for a year. An entire floor is dedicated for it," Sukanya told PTI.
Besides the exhibition, a tribute was organised by his disciples and other musicians in Delhi on his birthday (April 7).
In his long career Ravi Shankarji collaborated with other great artistes like Yehudi Menuhin, Philip Glass, John Coltrane, and The Beatles' George Harrison, who called the sitar maestro 'The Godfather of World Music'. Ravi Shankar was awarded the Bharat Ratna in 1999.
His contribution to Indian music will continue to inspire others. "There was no one like him. He was a huge figure and a great musician like him is yet to come. Raviji had an amazing life. He kept performing just weeks before his death. He was the face of Indian music and brought it on the global map in the 1960s."
She admits that there has been a vacuum since his death in 2012 but putting his work together has kept her busy.
"Yes, there is a vacuum after his death but I feel he is still with me and guiding me on every step of this journey. He had a huge presence in my life. There is so much of his work that has to be done. He wrote so many songs and had such a great performing career. I am trying to collect everything and put it together."
Recalling the great bond that they shared despite an age gap of three-decades, Sukanya said she was madly in love with the musician. "I was wild and did exactly what I liked. I was so much in love with him. We had Anoushka outside of the marriage. I am a modern woman but I worshiped him. He commanded that respect," she said.
Ravi Shankarji was involved with other women when they met but Sukanya said she always knew what she was getting into.
"There was this beautiful thing about him that he put everything on the table. He never lied to me or hoodwinked me into anything. He was very clear from the beginning. He told me, 'This is what I can give you'. I knew what I was getting into by being in his life," Sukanya recalled.
She now has a family that includes the children and grandchildren of Ravi Shankarji from his previous relationships and they are a huge part of her life now.
"My life is blessed. People used to say that his children will be with you till he is there but that has not happened. I continue to be a presence in their life. The grandchildren call me dida. I have a great family that includes Subho's children, Anoushka and Norah (Jones)."
Before his death, Ravi Shankarji wrote an opera called Sukanya from his hospital bed. Royal Opera House is planning to bring a performance on it in 2017. David Murphy, Anoushka and Amit Chaudhuri are working on it, she said.