Beyond the oft-satirized public persona, Prince was universally acclaimed as one of the most gifted artists of his generation, mastering a versatile electric guitar that he could play behind his back or blindfolded, and singing in a distinctive falsetto that showed no signs of fading with age 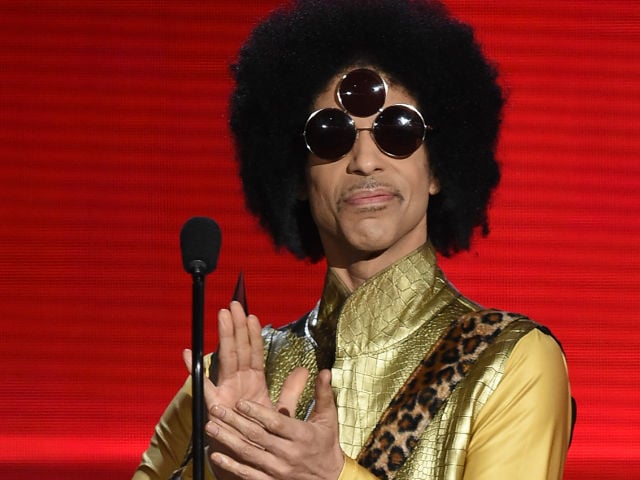 Prince, who died suddenly on Thursday at 57, transformed the music landscape with his infectious funk before becoming a reclusive rebel who brazenly challenged industry conventions.
The so-called Kid from Minneapolis created 1984's Purple Rain, which regularly tops lists of the greatest albums of all time, but he was so startlingly prolific that he entered a legendary feud with his label as it tried to rein him in.
Prince became famous in his later career for eccentricities that included changing his name to an unpronounceable "love symbol," announcing his concerts at the last minute and refusing to let reporters take notes on, let alone record, encounters with him.
But beyond the oft-satirized public persona, Prince was universally acclaimed as one of the most gifted artists of his generation, mastering a versatile electric guitar that he could play behind his back or blindfolded, and singing in a distinctive falsetto that showed no signs of fading with age.
Despite becoming one of the biggest stars of his generation - one of his songs was cheekily called All the Critics Love U in New York - Prince insisted on living near his hometown of Minneapolis where he built his complex of Paisley Park.
Prince recorded albums in a state-of-the-art studio at Paisley Park and also threw public parties, the last of which took place Saturday. He kept his back recordings in the studio's vaults and, as it turned out, died at the compound.
"One thing I'd like to say is that I don't live in a prison. I am not afraid of anything," Prince said in a rare recorded interview in 1986 with MTV at the height of his fame.
"I haven't built any walls around myself, and I am just like anyone else. I need love and water.
"I don't really consider myself a superstar. I live in a small town, and I always will."
'The Kid' wins fame
Born as Prince Rogers Nelson, the future pop icon grew up in Minneapolis with parents who were both jazz musicians, his father a pianist and his mother a singer.
Prince was eventually shuttled between different homes after his parents split but to the surprise of some fans had in many ways a conventional upbringing that included playing basketball in high school.
He had his start playing in bands as a teenager and eventually landed a record deal with Warner Brothers. He temporarily moved to California to record and played every single instrument on his 1978 debut For You.
His self-titled second album -- foreshadowing Prince's future work ethic, he recorded the album within weeks of his first release -- marked the start of his commercial success with instantly danceable tracks such as I Feel For You, later re-recorded with Chaka Khan.
Prince put out a string of hits in the following years including the album 1999 whose title track's science-fiction lyricism - Tonight I'm gonna party like it's 1999 - became an anthem of sorts two decades later at the turn of the millennium.
But Prince won his greatest acclaim with Purple Rain, which was accompanied by a semi-autobiographical movie in which "The Kid" fights to play at the legendary First Avenue club in Minneapolis against a rival band led by the brash Morris Day.
The album, recorded with Prince's backing band The Revolution, generated hits such as Let's Go Crazy, When Doves Cry and I Would Die 4 You, along with Darling Nikki, which like many of Prince's songs oozed sexuality.
From star to 'slave'
Prince followed up Purple Rain with a series of hit albums including Sign o' the Times, Graffiti Bridge and the soundtrack to the 1989 album Batman.
But Prince also grew increasingly estranged from his record label, Warner Brothers, which tried to rein in his knack of constant releases.
In the early 1990s Prince - in a charged gesture for an African American - wrote the word "slave" on his cheek to protest his conditions and changed his name to the "love symbol" as he sought to record on his own.
Prince went on to experiment widely on ways to release albums, putting out a total of 39 studio works during his life and winning seven Grammys.
He was an early proponent of the Internet but had a tumultuous relationship with the online world.
In 2010 he declared the Internet "completely over" and released a CD as an insert to European newspapers.
But he recently became convinced of the possibilities of streaming, signing on to rap mogul Jay-Z's service Tidal in part because it enabled him to put out albums more quickly with his own artistic control. In the last two years of his life, Prince put out no fewer than four albums. He also toured widely, announcing tickets at the last minute to evade resellers.
Private grief
Prince, who had struggled depression early in his career, suffered a personal tragedy in 1996 when his then wife, dancer Mayte Garcia, gave birth to a boy who died a week later from a rare condition.
Like his contemporary and sometime rival Michael Jackson, Prince always guarded family details, but Garcia said the baby's loss contributed to the breakdown of their marriage.
Often thought to belong to another realm, Prince nonetheless engaged in politics periodically throughout his life.
Last year he released Baltimore, a tribute to African American victims of police brutality after sometimes violent protests in the city.
Prince last year also planned a tour on piano and microphone of Europe - explaining that he was looking for a challenge as he was so known for his guitar - but canceled the tour in anger over scalpers and instead put on the shows in North America and Australia.
Yet the artist had recently appeared to be more sociable, repeatedly inviting fans to party at Paisley Park.
Prince recently announced that he would finally tell his story in his own words with a memoir, named The Beautiful Ones after his song on Purple Rain, to come out in 2017.
But Prince died just one month later, meaning he may remain elusive after all.