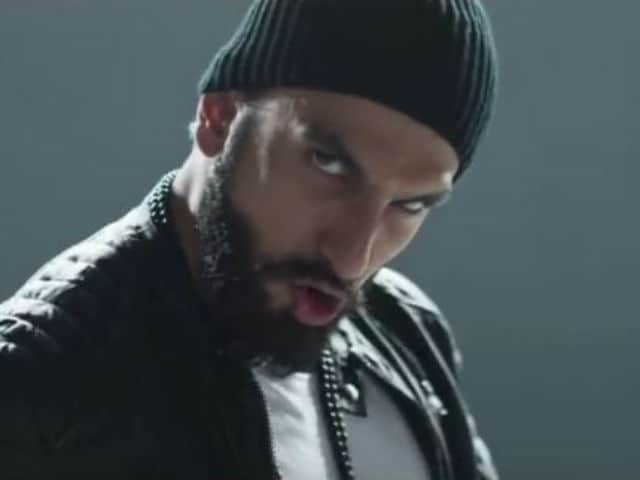 Ranveer Singh in a still from the video

So you think Ranveer Singh's crazy? Guess what, the actor doesn't give two hoots about it. And next time you say, 'That Ranveer guy's so crazy!' he might reply and say, Haan, main hoon Hatela because 'he don't' hold back'
Actor Ranveer Singh became rapper for a clothing brand but the lyrics are so cool that you might want to add the song to your play list.
Sample this:
'Live every day like it's my aakhri or pehla, Na hoon fukra, Na hoon vella, Tere nehle pe hoon dehla, Beta main hoon tera guru, Aur tu hai mera chela, That Ranveer guy's so crazy! Haan, main hoon S@@@@ hatela! I'm a freak in this carnival, Instincts of an animal, Ruthless like a cannibal, Foolish and hungry, All and sundry, Be warned, Ab batao King kaun? It's on, I'm King Kong!'
And by the way, the credits for the lyrics go to none-other-than the actor himself. In the 2 minute long video, Ranveer channelizes his inner flamboyance onscreen while some awesome dancers show their gravity-defying moves.
Ranveer Singh is a quite a busy man. The actor will soon fly to Paris to launch the trailer of his next, Befikre with Vaani Kapoor at the Eiffel Tower on October 10. Aditya Chopra is back on the director's chair after eight years (his last was Shah Rukh Khan and Anushka Sharma's Rab Ne Bana Di Jodi in 2008). Befikre is set to hit the screens on December 9.
But before you catch that, watch Ranveer 'The Rapper' in action here:
DISCLAIMER: (Viewer discretion advised. Some content in this video may be unsuitable for children.)