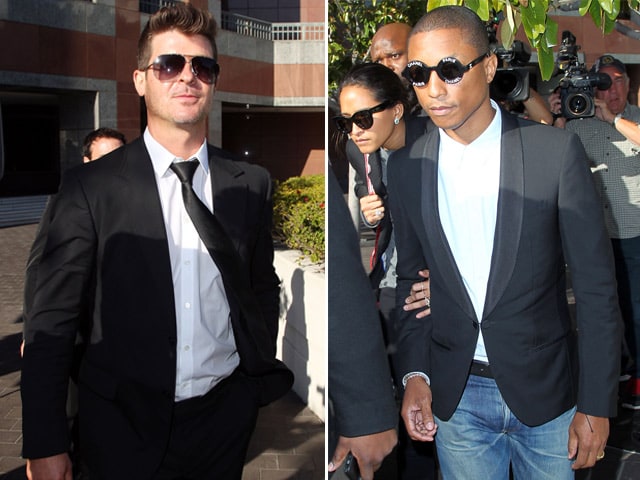 Robin and Pharrell have to pay US$7.3 million in damages to Marvin Gaye's family. (Image courtesy: AFP)

During the trial Pharrell Williams has said, "Soul music sounds like soul music. I must've been channeling that late '70s feeling"

A US jury on March 10 ordered pop stars Robin Thicke and Pharrell Williams to pay US$7.3 million in damages to the family of Marvin Gaye, ruling the pair copied his music in writing their 2013 mega-hit song Blurred Lines.
The eight-member California panel, which had been deliberating since last week, found that the pop stars lifted parts of Mr Gaye's 1977 hit Got to Give It Up.
The Gaye heirs had sought a portion of the nearly US$16.5 million in profits that the hit party song has reaped since its release two years ago.
Evidence presented in court suggested that Robin and Pharrell each earned more than US$5 million from the success of the record.
During the two-week trial, Pharrell said he understood why fans connected the two songs, but explained, "Soul music sounds like soul music. I must've been channeling that late '70s feeling."
The Gaye estate had said that Blurred Lines copied elements of the 1970s track. The two sides brought in music experts who dissected the structures of the two songs to debate the merits of the claim.
The jury cleared rapper Clifford "T.I." Harris Jr - who collaborated with the pair on the song - of any wrongdoing.
At the time the Gaye song was copyrighted, only written music - not sound recordings - could be registered with the copyright office.
Although jurors saw the Blurred Lines video and heard the song, they were told to only consider the chords, melodies and lyrics of the songs, rather than production elements.
Long before the trial, Blurred Lines was controversial. The song contains the refrain I hate these blurred lines / I know you want it and has been condemned by critics who say the lyrics refer to the issue of sexual consent.
The video also features naked women parading before Robin Thicke.