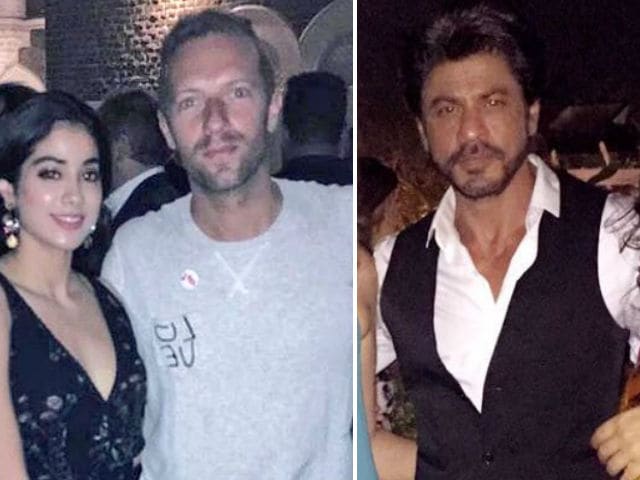 The decks have officially been cleared for Coldplay and Mumbai, ready or not, here they come. Two days before their concert as part of India's first Global Citizen Festival, a grand welcome party was held in Mumbai by the Chris Martin-fronted band. Guests included Shah Rukh Khan, A R Rahman, Shraddha Kapoor and Arjun Kapoor. Chris Martin was pictured partying with the rank and file of Bollywood at the Taj Mahal Hotel in Mumbai on Thursday night.
Earlier in the day, the Bombay High Court refused to stay the concert after a petition was filed by activists challenging the Maharashtra government's decision to waive entertainment tax.
So Thursday evening, there was reason enough to party. Shah Rukh Khan was there. Chris Martin was pictured with Sridevi's young daughters - Jhanvi, who will soon debut in a Karan Johar film, and Khushi Kapoor.


Legends of the #Bollywood music industry come together at the #TajMahalPalace to support #GlobalCitizenIndia, tonight. #TajHeartnesspic.twitter.com/urlBv9gr57

Before or after the party, Chris Martin jammed with Farhan Akhtar, Shankar-Ehsan-Loy and Ritesh Sidhwani.


Had the most beautiful & memorable evening. Jamming with @FarOutAkhtar@ShankarEhsanLoy@coldplay#chrismartin hope u enjoyed the safe zone pic.twitter.com/ob6mj39jki

Chris Martin and Coldplay have visited India at least twice before but have never performed. Last year, Chris played an impromptu gig in a Delhi nightclub which much of the city missed. He later returned to India with his band to shoot the music video of their song Hymn For The Weekend in Mumbai. Actress Sonam Kapoor featured briefly in the video, alongside no less a person than Beyonce
. Earlier this year, a Coldplay concert in Berlin was packed with actors from Bollywood - Deepika Padukone, Alia Bhatt, Sonam Kapoor and Malaika Arora Khan were all spotted.
Coldplay will perform at the MMRDA grounds in Mumbai's Bandra-Kurla complex tomorrow. Actress Dia Mirza provided details:


All you #GlobalCitizensIn please note. @coldplay is playing a full set https://t.co/N5bDG3yo5Z

Hope you got the memo: @coldplay is playing a full set at the Festival. Arrive before gates close at 4:00pm or you will miss them!

Months ago, Twitter went into meltdown after tickets to the concert were rumoured to be priced at Rs 25,000. Officials later confirmed that this was untrue - most tickets would be free and would need to be 'earned' by participating in social work. The portion of tickets that were available at a price were sold out within minutes online, with virtual queues of over an hour.
Most of Mumbai, and fans from across the country, will be at the Coldplay concert tomorrow - among the celebrities, Aamir Khan will not attend because he will be in Balali, Haryana, for the wedding of wrestler Geeta Phogat, whose father Mahavir he plays in new film Dangal.