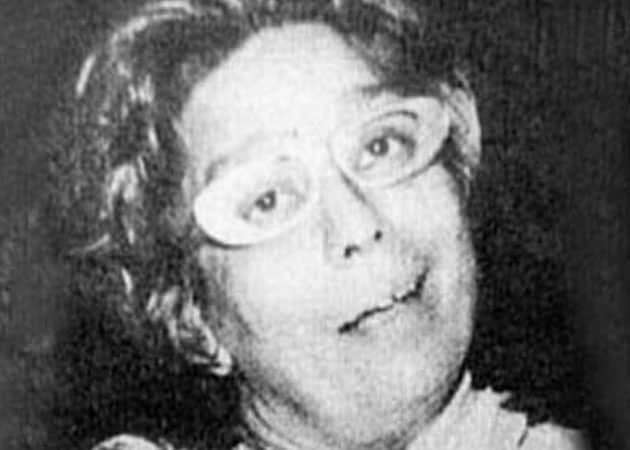 Legendary singer Shamshad Begum, one of the first playback singers in the Hindi film industry and voice behind hit songs like Mere Piya Gaye Rangoon, Kabhi Aar Kabhi Paar and Kajra Mohabbat Wala, has died at her Mumbai residence.

Legendary playback singer Shamshad Begum, who mesmerised music lovers with classics like Kahin Pe Nigahen Kahin Pe Nishaana, Mere Piya Gaye Rangoon, Kabhi Aar Kabhi Paar and Kajra Mohabbat Wala, died at her Mumbai residence from age related ailments. She was 94. (Read: Shamshad Begum: A song in her heart )
"She was not keeping well for past few months and was in and out of hospital. She passed away last night at our home (Powai in northeast Mumbai). The funeral was a solemn affair with a few friends present," Shamshad Begum's daughter Usha Ratra told PTI.
"She kept herself away from glamour of the industry despite being one of the top singers of her era as she did not like limelight. My mother used to say that artistes never die. She wanted to be remembered for her songs," Usha added.
The singer was living with her daughter and son-in-law Yog Ratra in Mumbai, ever since her husband Ganpat Lal Batto died in 1955.
Born on April 14, 1919 in Amritsar, Punjab in a traditional family, Begum made her debut on Peshawar Radio in Lahore on December 16, 1947, captivating the hearts of her listeners with her enchanting voice. (Read: Six things you didn't know about Shamshad Begum)
A versatile singer, Shamshad Begum enthralled millions with her songs in Hindi, Bengali, Marathi, Gujarati, Tamil and Punjabi. She sang for almost all the top composers of her time including Ghulam Haider, Naushad and O P Nayyar.
Her major hits include Kahin Pe Nigahen Kahin Pe Nishana, Boojh Mera Kya Naam Re and Leke Pehla Pehla Pyar (CID-1956), Saiyan Dil Mein Aana Re (Bahar-1951) and Chod Babul Ka Ghar (Babul-1950) and Kajra Mohabbat Wala (Kismat-1968).
Singing was a passion for Shamshad Begum from a very early age but her conservative family did not encourage her at that time. It was her paternal uncle who convinced her father to allow her to sing. (Pics: The greatest hits of Shamshad Begum)
She soon had a contract with record company Xenophone. Her father agreed to let her sing on the condition that she would attend the recordings in a burkha and would not get herself photographed.
Shamshad Begum continued to honour her father's wishes even after getting married to Ganpat Lal Batto at the age of 15 in 1934.
Shamshad Begum recorded many songs under the guidance of ustad Ghulam Haider. She started playback singing with Dalsukh Pancholi's Punjabi film Yamla Jat which had music by Haider. Pancholi's first Hindi film Khazanchi had all the songs in Shamshad Begum's voice.
Haider continued to mentor the budding singer by recording her voice for films like Zamindar, Poonji and Shama. He brought Begum to Mumbai as part of his team. She also sang for All India Radio as part of Delhi's Crown Imperial Theatrical Company of Performing Arts. Her songs were frequently aired on AIR Lahore.
A movie buff, Shamshad Begum was a huge fan of K L Saigal and said that she had watched his Devdas 14 times. Enchanted by her voice, director Mehboob Khan used Begum's voice in Taqdeer (1943) where he introduced Nargis as a heroine.
Soon Shamshad Begum was singing for other composers like Rafiq Ghaznavi, Ameer Ali, Pt Gobindram, Pt Amarnath, Bulo C Rani, Rashid Atre, M A Mukhtar in the pre-independence era. After partition, Haider migrated to Pakistan but Begum remained in Mumbai.
Composer Naushad used Shamshad Begum's voice in films like Anokhi Ada, Mela, Dulari, Babul, Deedar, Jadoo, Aan and Mother India.
It was a time when Lata Mangeshkar and Asha Bhosle were emerging as the new voices in cinema but Begum continued to hold sway.
Her famous duets in this period are Darr Na Mohabbat Kar Le in Andaz, Bachpan Ke Din Bhula Na Dena from Deedar and the famous qawali Teri Mehfil Mein Qismat from Mughal-e-Azam, her last for Naushad.
The singer also recorded many songs with O P Nayyar and she sang some of her most popular numbers under Nayyar's direction.
Kabhi Aar Kabhi Paar from Aar Paar, Ab To Jee Hone Laga from Mr and Mrs 55, Kahin Pe Nigahen Kahin Pe Nishana, Boojh Mera Kya Naam Re and Leke Pehla Pehla Pyar from CID are popular and remixed even today. Shamshad Begum sang these numbers under OP Nayyar's music direction.
Under Nayyar, Begum recorded songs in Musafir Khana, Shrimati 420, Howrah Bridge, Naya Daur and Kismat. Shamshad Begum is credited with singing the first westernised number Aana Meri Jaan Sunday Ke Sunday for film Shehnai under C Ramchandra, who utilised the mischief in her voice for fun numbers like Mere Piya Gaye Rangoon for film Patang. Shamshad Begum's talent was first spotted by her principal when she was in primary school. Impressed by the quality of her voice, she was made head singer of classroom prayer. At 10, she started singing folk based songs in religious functions and family marriages.
In her twilight years, Shamshad Begum was confined to a wheelchair. She was conferred Padma Bhushan award in 2009.
Watch video: