Singing With Rahman is Like Winning Oscar and Grammy, Says Darshana 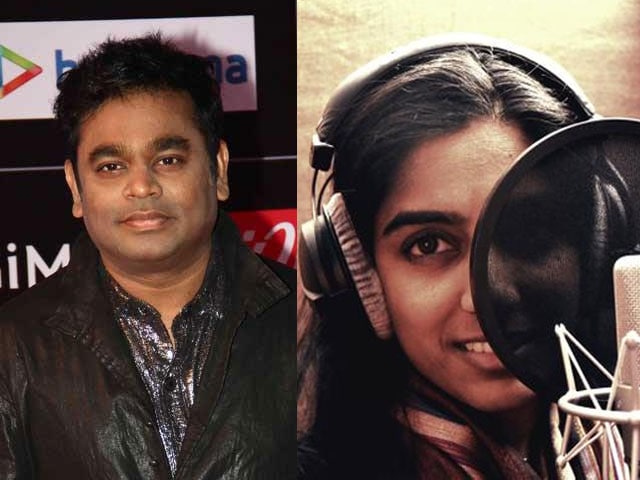 Playback singer Darshana describes the experience of sharing vocal space with double Oscar-winning composer AR Rahman as equivalent to winning a coveted award like an Oscar or a Grammy.

In Mr Rahman's upcoming Tamil soundtrack OK Kanmani, Darshana has crooned five tracks, including a duet with him.

"To see your name right next to AR Rahman is a feeling I can't explain. It's beyond my dream. It's like winning the Oscar, Grammy and National Award all at the same time. To share the vocal space with him is a special feeling," Darshana told IANS.

"Even though my contribution to this movie is very minuscule, it's still special to sing three songs in Tamil and two in Telugu from the same album. And one of songs happens to be a duet with Rahman sir. It was only after I saw the track credits, I realised it was a duet," she said.

According to Darshana, the album of OK Kanmani, which is scheduled to release on April 1, is "very fresh and young".

In the album, Darshana has sung Kaara Aattakkaara, Theera Ula and its Telugu versions. She also sang the female version of Mental Manadhil in Telugu.

Darshana's collaboration with Mr Rahman started in 2007 with Rajinikanth's Sivaji.

She sang the opening lines of the hit song Balleilakka from the film. In the same year, she also crooned Maduraikki Pogathadi from the Tamil film Azhagiya Thamizh Magan and some portions of Mayya Mayya from Mani Ratnam's Guru.

Her other AR Rahman songs include Pappu Can't Dance Saala, Nazrein Milaana from Jaane Tu... Ya Jaane Naa and Chinamma from Sakkarakatti.

Darshana says singing for Mr Rahman is special because he knows "how to get the best of a vocalist".

"It has worked in my case really well because he's given me different kinds of songs. While Balleilakka was folk; Maduraikki was complete folk with a western touch; Mayya Mayya was Arabic. Pappu Can't Dance Saala was hip-hop and Nazrein Milaana was a melody. He has given me the opportunity to work on my vocals and showcase the best of what I can," she said.

She adds one can't realise how Mr Rahman gets the best from his singers.

"I think that's where the magic lies. I have not worked with many composers, but with the few I've worked, they say what's expected from me and I deliver. With Mr Rahman sir, he gives you the space to experiment with your own voice and at the same time, he guides you as well. So you learn how to own the song and he knows how to get what he wants from his singers," she said.

"I'm studying Jazz vocals at Berkeley. I teach Carnatic music to kids. I'm looking to take more vocal workshops. And if there are local bands where I feel I can perform, I do go and participate," said Darshana, who is currently working on two singles that she plans to release by this year end.