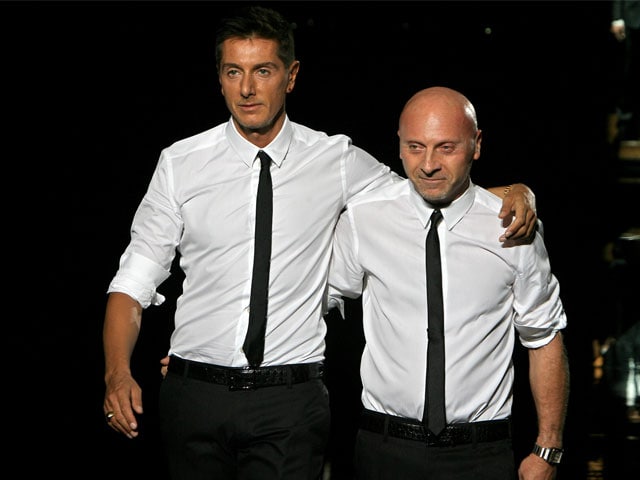 The designers, who are gay and were in a long-term relationship with each other a few years ago, said it was the veteran British singer who was being judgemental

Italian designers Dolce and Gabbana on Monday accused singer Elton John of being authoritarian, ignorant and hypocritical in a row over IVF babies, escalating a spat that has embroiled some of the world's biggest stars.

Elton John, 67, stirred up a social media storm on Sunday when he called for a boycott of the D&G designer label after Domenico Dolce referred to babies conceived through IVF as "synthetic".

In comments endorsed on social media by celebrities, including Victoria Beckham, Ricky Martin, Courtney Love and Martina Navratilova, the gay star accused the Italian duo of "wagging your judgemental little fingers at IVF."

In a typically scathing post on Instagram, he added: Your archaic thinking is out of step with the times, just like your fashions. I shall never wear Dolce and Gabbana ever again. #BoycottDolceGabbana

The designers, who are also gay and were in a long-term relationship with each other a few years back, said it was the veteran British singer who was being judgemental.

Mr Dolce said his comment that IVF was not for him should not have been interpreted as disapproval of anyone else's choices.

He wrote on Instagram: I'm Sicilian and I grew up in a traditional family, made up of a mother, a father and children. This is the reality in which I grew up, but it does not imply that I don't understand different ones. I was talking about my personal view, without judging other people's choices and decisions. His business partner Mr Gabbana revealed that he was so infuriated by John's statement that he had posted the comments "#fascist" and "#boycotteltonjohn" on their Instagram page.

Speaking to Italian daily Corriere della Sera's web edition, Mr Gabbana said he had expected better from a singer he once admired.

"I didn't expect this, coming from someone whom I considered, and I stress 'considered', an intelligent person like Elton John," he said.

"I mean, you preach understanding, tolerance and then you attack others?

"Only because someone has a different opinion? Is this a democratic or enlightened way of thinking? This is ignorance, because he ignores the fact that others might have a different opinion and that theirs is as worthy of respect as his," he added.

He said he had not tried to contact the pop star.

He said, "That would be useless! It's an authoritiarian way of seeing the world: agree with me or, if you don't, I'll attack you."

Elton John has two young sons with his husband David Furnish who were conceived through IVF and born through surrogacy.

In the interview which caused the storm, Mr Gabbana said he "would have a child tomorrow" if he could, while Dolce explained why he did not feel he could go down that road.

"You are born and you have a father and a mother," he had told Panorama magazine.

He had said, "Or at least that's the way it should be, and that's why I'm not convinced by children from chemistry, synthetic babies, uteruses for rent, semen chosen from a catalogue."

Victoria Beckham weighed into the row on Monday by tweeting:

Privately, D&G executives admitted that the celebrity backlash could do some temporary damage to the company's global brand and sales but predicted that the "storm in a test tube" would blow over in a week or so.