Thanks Chris Martin, Says A R Rahman After They Sang Maa Tujhe Salaam 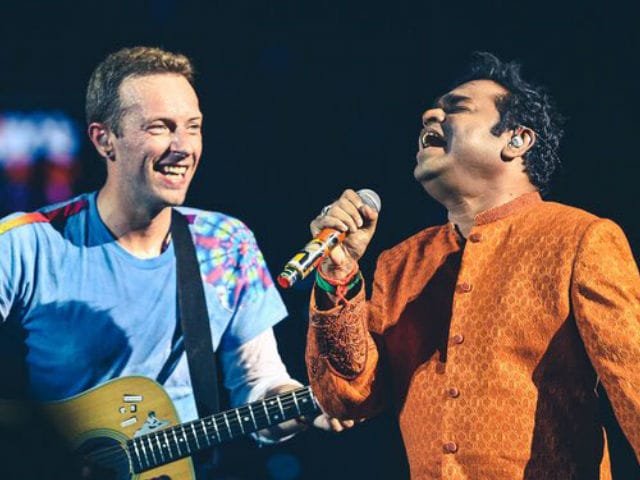 Coldplay's gig at the Global Citizen Concert on Saturday was extra special for Indian fans because the band's frontman Chris Martin sang Maa Tujhe Salaam with Oscar-winning composer A R Rahman. Yes, that sent shivers down everyone's spine. For Rahman, like for many of his fans, it was "an unforgettable moment." The 49-year-old singer-composer thanked his contemporary in a tweet. Maa Tujhe Salaam is a single from Rahman's 1997 album Vande Mataram.
Rahman posted this thank you tweet addressed to Chris Martin on Tuesday:


Dear Chris, thanks for joining me on #MaaTujheSalaam..it was indeed an unforgettable moment!... https://t.co/LmvVrk4vdz

Rahman had earlier shared a clip of their performance.

Coldplay performed as part of the first ever Global Citizen Festival in India. Bollywood celebrities like Shah Rukh Khan, Amitabh Bachchan, Farhan Akhtar, Sonam Kapoor, Vidya Balan, Alia Bhatt, Parineeti Chopra and Arjun Kapoor attended and performed at the fest, which was held on November 20.
International artistes like Jay-Z, The Vamps and Demi Lovato performed before Coldplay brought the curtains down in style. They seemed as impressed with their Indian audience as we were with them. The other highlight of Chris Martin's performance was when he sang Channa Mereya from recently released film Ae Dil Hai Mushkil, originally sung by Arijit Singh. From his own hits, Hymn For The Weekend, A Sky Full Of StarsParadiseDon't Panic and In My Place won maximum cheers.
We don't know yet what Chris has to say about the gig as he's not on Twitter. Although, on a related note, a certain other Chris Martin, did notice a sudden surge of followers following Coldplay's concert in India. He correctly deduced that his new followers believed him to be Coldplay's Chris Martin, tweeting:


To the 500 Indian followers I gained in the last day I'm not in Coldplay. I'm sure Chris was great in Mumbai but I can't pass on the message

He also changed his profile picture:

This Chris Martin is a comedian, who decided to cash in on this confusion:


Might as well cash in on this
New Indian followers if I do a comedy show in India will any of you come?
Clip herehttps://t.co/nKZFEvZdH5

The Global Citizen Festival was a charity event aimed to raise awareness on several social causes.