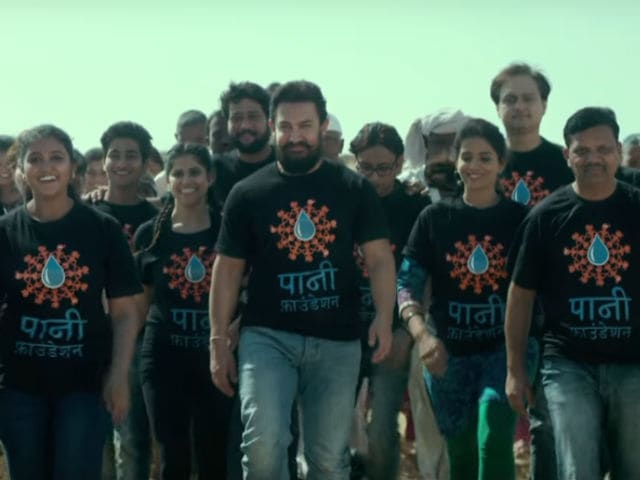 Bollywood star Aamir Khan has always tried to leave a mark on the society by his work and the film he does. The 51-year-old star has through his films raised society's consciousness, like his latest film Dangal talks about women empowerment. The actor, who is still winning accolades for Dangal, has now started preparing for his next project. Aamir will now be seen in the next edition of his popular television show Satyamev Jayate. The show will this time feature episodes on the acute water crisis in Maharashtra. The makers of the show today released a music video titled 'Satyamev Jayate Water Cup Anthem.' The video, Toofan Aala is directed by Marathi filmmaker Nagraj Manjule and aims to create awareness among the people on water conservation in the drought-stricken villages of Maharashtra.
Watch Toofan Aala, Satyamev Jayate Water Cup Anthem here:

The song has been written by Guru Thakur and is in Marathi. It has been composed by musician Ajay-Atul. Aamir's wife Kiran Rao makes her debut as a singer with the song that features various Marathi actors, Aamir and his Dangal co-star Fatima Sana Shaikh. "I was made to sing the song on my husband's diktat. I was nervous in the studio but Ajay and Atul encouraged me to sing," Kiran told news agency PTI.
The first edition of 'Satyamev Jayate Water Cup' is designed to focus on three districts, and one taluka each within those districts while the second aims to extend the watershed management programme to more areas. It is designed as a competition between villages, that will be involved in water conservation activities, with prize money of Rs 50 lakh. The duration of the competition is from April 8 to May 22.
"Just like I am nervous and tense before the release of my films, I am anxious about the second edition of Satyamev Jayate Water Cup organised by Paani foundation," Aamir told news agency PTI. He also added, "It gives me satisfaction that we have been able to inspire confidence among the villagers that they can overcome water crisis."
(With inputs from PTI)