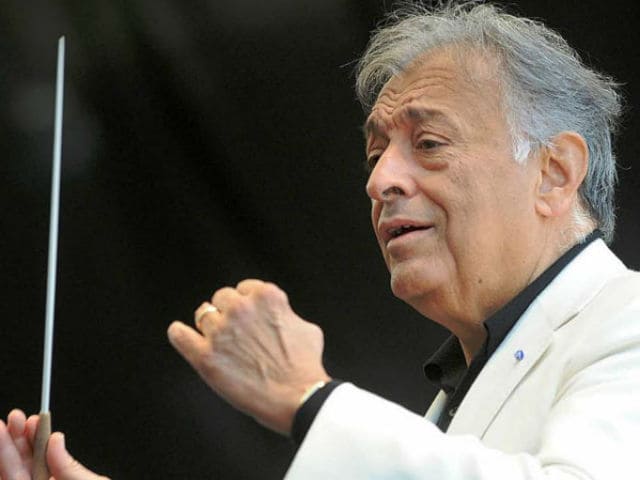 A file photo of Zubin Mehta.

Interacting with the media at the venue, Bradman, granddaughter of cricket legend Don Bradman said, "For my grandfather maestro Zubin Mehta was the greatest hero and I have grown up listening to him. I wish that my grandfather could see me now. This is a most humbling and truly wonderful experience"

Music maestro Zubin Mehta, on October 30, led the Australian World Orchestra to a scintillating evening of rousing Western classical music in New Delhi, with the highlight being the powerful voice of soprano Greta Bradman, granddaughter of cricket legend Don Bradman.
The 79-year-old Mumbai-born virtuoso received a standing ovation who swished his baton with a theatrical flourish to herald the first composition of the evening Overture from Wolfgang Mozart's The Marriage of Figaro.
A packed audience at Jawaharlal Nehru Weightlifting Indoor Stadium provided the setting to the soaring crescendo of violins, trumpets and drums from a strong musical team comprising musicians drawn from some of the world's greatest orchestras, including Berlin, Vienna and Israel Philharmonic, the Chicago, London, Sydney and Melbourne Symphony Orchestras.
Dressed in a stunning flaming red off shoulder gown paired with chandelier earrings, Greta took to the stage with her powerful vocals for the next piece, injecting a bit of fun by twirling around playfully Mr Mehta, a gesture which made the audience laugh in glee. (Also Read: Zubin Mehta: Would love to come back to Kashmir)
Greta thanked the audience for the applause. "This is my first visit to this beautiful country. Thank you for all the love you have shown me. I would love to come back and perform," she said.
Earlier interacting with the media, Greta said, "For my grandfather maestro Zubin Mehta was the greatest hero and I have grown up listening to him. I wish that my grandfather could see me now. This is a most humbling and truly wonderful experience."
She performed Damor Sullali Rosee (Il Trovatore) one of her favourite pieces by Italian composer Giuseppe Verdi.
"I think it's a wonderful role and so expressive. The maestro basically selected what I would sing and I sent my repertoire list." Other pieces that she belted out included Mozart's Der Holle Rache (The Magic Flute).
Her third piece left many in the audience misty eyed and the conclusion was marked by a visibly emotional Greta exiting the stage in a hurry.
Apart from Mozart and Verdi, works of composers Rossini, Schubert and Brahms were also performed by the orchestra to an audience that had the presence of several young children.
For a Mozart masterpiece, Sinfonia Concertante, Mr Mehta introduced two young violinists - Daniel Dodds and Tobias Lea.
The soulful piece with the perfect milieu of high and low notes lasted about 20 minutes and received a thunderous applause.
The charismatic Zubin Mehta had invited the AWO for a series of concerts in India in Delhi, Chennai and Mumbai after he led them in concert series, two years ago.