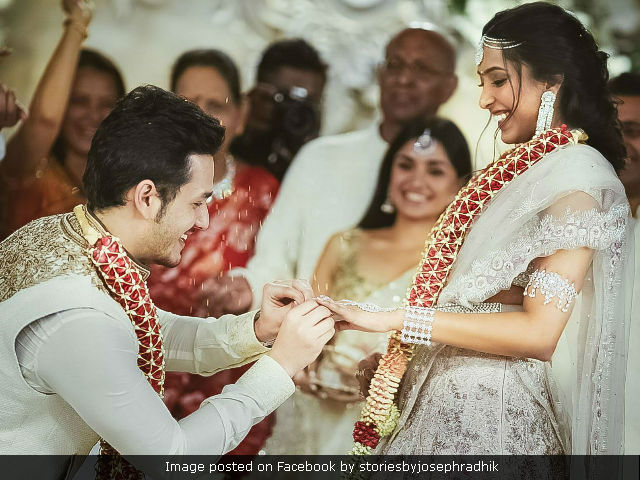 Akhil and Shriya got engaged in December. (Image courtesy: Stories by Joseph Radhik)

Actor Akkineni Nagarjuna's younger son Akhil's wedding to Hyderabad-based fashion designer Shriya Bhupal was called off recently and while neither families have spoken, Times Of India reports that the relationship began disintegrating after Akhil and Shriya allegedly had a 'huge fight' at Hyderabad airport. Friends of the couple also told TOI that all appeared to be well between the former couple when they attended the engagement of Akhil's brother Naga Chaitanya to actress Samantha Ruth Prabhu in January. "They walked in together and looked very much in love. God knows what could have gone so wrong in a few weeks, but it's sad," Times Of India quoted a friend of Akhil and Shriya as saying.
Akhil Akkineni, 22, and Shriya Bhupal, 23, dated for two years. Recently, it was reported that invitees to their destination wedding in Italy were informed that the nuptials had been cancelled. A source told Times Of India that Akhil Akkineni and Shriya Bhupal recently had a "huge fight" at the Hyderabad airport. "Initially, we all thought it's just the usual lovers' tiff but things haven't been the same between them ever since, that's for sure," a close Akkineni aide told TOI.
Friends speculated that Akhil, who is currently busy filming Vikram Kumar's yet-untitled film, wasn't able to give his fiancee "enough time," reports Times Of India. Another friend suggested that Akhil may have had second thoughts about getting married at all.
Shriya Bhupal is the granddaughter of industrialist GVK Reddy and a graduate from New York's Parsons School of Design. Actress Alia Bhatt, Shraddha Kapoor and Radhika Apte have often been spotted wearing her designer label - Shriya Som. Akhil Akkineni debuted in 2015 film, also titled Akhil. The film was a superhit and now Akhil is preparing for his second film, the aforementioned project with director Vikram Kumar.
Shriya Bhupal's and Akhil Akkineni's families have not released an official statement regarding the cancellation of the wedding.