Allu Arjun and Sneha Reddy married in 2011 and have two children, a son and a daughter 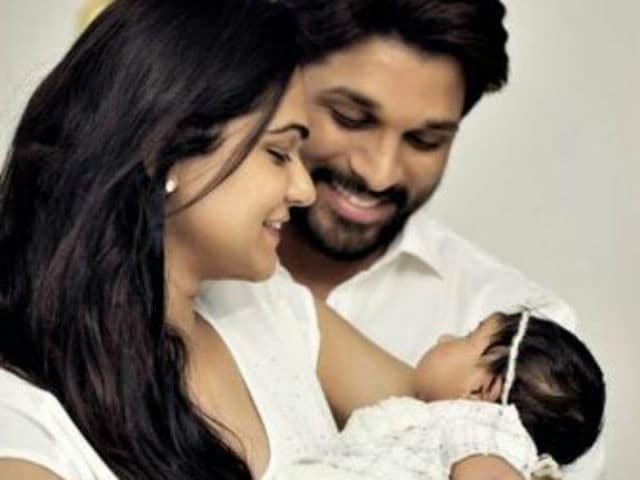 Telugu actor Allu Arjun, who became a father last month revealed his daughter's name on Twitter. The 33-year-old actor shared an adorable picture of himself with wife Sneha Redyy and daughter, whom the couple has named Allu Arha. He captioned the image as, "Our newly arrived angel Allu Arha. Hindu meaning: Lord Shiva. Islamic meaning: Calm& Serene. "AR" jun & Sne "HA" together ARHA #AlluArha." (sic). The couple welcomed baby girl Allu Arha on November 21. This is the couple's second child. Allu and Sneha got married in 2011 and have a two-year-old son Allu Ayaan. Allu is the son of producer Allu Aravind and Telugu superstar Chiranjeevi's sister Nirmala.
Here's what the actor posted:

On his daughter's birth, an elated Allu had shared his joys on becoming a father for the second time and said that he couldn't have asked for more.
This is what he shared:


Blessed with a Baby Girl ! Soooo Happppyyyyyy right now ! One boy & one girl. Could'nt ask for more. Thank you for all the wishes. Lucky me

Allu Arjun made his debut in the Telugu film Vijetha at the age of 2. In 2001, he did a cameo in Chiranjeevi's film Daddy. But his first film as a full-fledged actor was in K Raghavendra Rao's Gangotri in 2003 for which he won CineMAA Awards and Nandi Awards for Best Male Debut. The actor has has featured in many hit films like Arya, Parugu, Desamuduru Arya 2 and Yevadu.
Allu Arjun's name was in the Top 50 of Forbes India 2015 and 2016 Celeb 100 list.
He is related to several Telugu stars. His grandfather, Allu Rama Lingaiah, was a celebrated comic actor. His uncles are Chiranjeevi, Pawan Kalyan and Naga Babu. His cousins are actors Ram Charan Teja, Varun Tej and Sai Dharam Tej.
Allu Arjun was last seen in Sarrainodu. His next film Duvvada Jagannadham will release in April 2017.