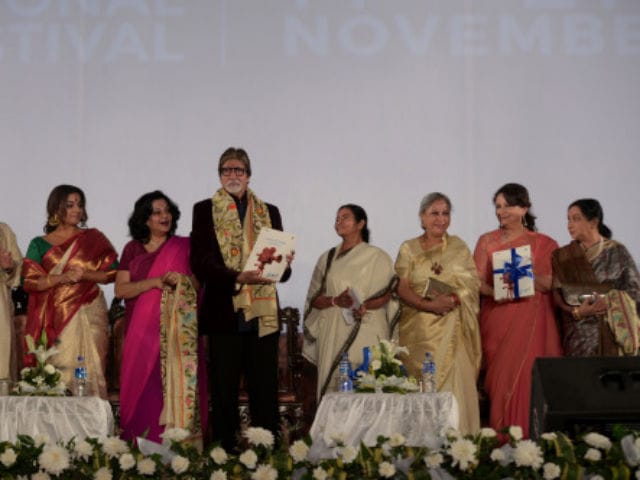 This image was posted by Amitabh Bachchan on his official blog .

"Films remain the most pervasive form of communication in entertainment in the contemporary world. Now, more than ever, we need to talk to each other, listen to each other and understand ourselves with respect to the world, and cinema is the best medium for doing this," said Amitabh Bachchan

India's plurality and greatness in diversity resonated here at the inauguration of the 21st edition of the Kolkata International Film Festival as megastar Amitabh Bachchan on November 14, emphasised on cinema's role in communication in the wake of controversies over communal prejudices dividing the world.
The ceremony began in style with a session of fusion music titled Home and The World, which was directed by percussionist Bikram Ghosh.
The East-West fusion witnessed American saxophonist George Brooks, Indian classical musician Rashid Khan and several others deliver renditions of themes from Hollywood hits such as The Godfather, Titanic and Mission Impossible as well as the Bollywood classic Abhimaan.
Special guest Sharmila Tagore and guests of honour Jaya Bachchan, Vidya Balan and Moushumi Chatterjee lauded the musicians for the spectacular show.(Also Read: Amitabh Bachchan to Inaugurate 21st Kolkata International Film Festival)
West Bengal Chief Minister Mamata Banerjee presided over the function while veteran Bengali actresses Madhabi Mukherjee and Sandhya Roy also attended the event.
Mr Bachchan gave his inaugural speech with a comprehensive history, packed with anecdotes of Indian cinema and its umbilical ties to Bengal's rich literature and culture.
The actor also spoke about the contribution of Bengal to Indian cinema, and described the role of films as the "most pervasive medium of communication in entertainment."
"Films remain the most pervasive form of communication in entertainment in the contemporary world. Now, more than ever, we need to talk to each other, listen to each other and understand ourselves with respect to the world, and cinema is the best medium for doing this," said Mr Bachchan.
Quoting Nobel laureate Rabindranath Tagore's verses from the National Anthem, Big B said that the lyrics highlight "India's diversity and equality at a time when cultures are being questioned and prejudices against communities are dividing the world."
Mr Bachchan reiterated Indian cinema's prowess in showcasing 'plurality' and 'diversity' throughout his speech.
"These early films used entertainment as a language to speak to the audience across national, class, economic and racial lines and helped immensely in highlighting shared cultural values and idealistic aspirations and understanding of good and evil. Most importantly, the banishment of communal prejudices and hatred," added Mr Bachchan.
Regarding legendary filmmakers such as Hrishikesh Mukherjee, Guru Dutt and Shakti Samanta, Mr Bachchan said that the West Bengal's strength has always been its "intellectual integrity and immense open-mindedness as well as deep belief in equality and social justice." Mamata Banerjee also spoke against intolerance.
"Tolerance is life. Intolerance is not acceptable to us," she said.
At the event, Sharmila Tagore, Jayaji and Vidya raised a toast to the festival's competitive segment on films helmed by women directors.
"It's fabulous that the competition focuses on women directors and I think this is the time of women power and goddess power and what could be better than Kolkata to start this," said Vidya.
"I am here today because of Rinku di (Sharmila Tagore). She is the one who took me to Manik kaku (Satyajit Ray) and told him that I have got your girl for Mahanagar," said Jaya