Arnold Schwarzenegger to Shankar: Came From Hollywood for Job Interview With You 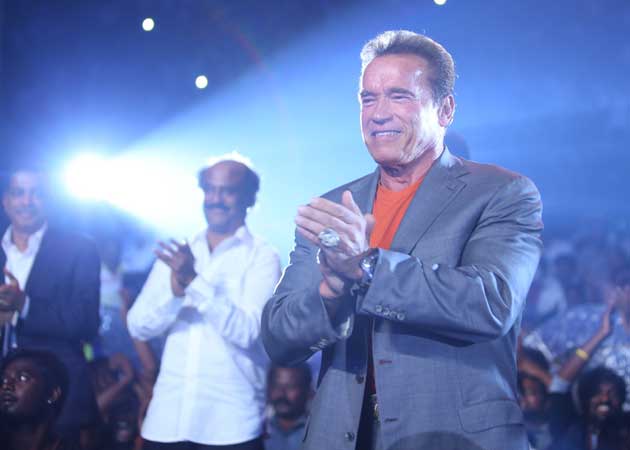 Arnold at the music launch of the upcoming movie I

It was a night less ordinary when Hollywood actor Arnold Schwarzenegger told Tamil director Shankar that he'd flown from Hollywood to Chennai to ask him for a role in his next film.

"I want do your next movie. I came all the way from Hollywood for a job interview here. I want to do your next movie, okay. Maybe King Conan? How about that?," Mr Schwarzenegger announced at the grand launch of the music of I, directed by Shankar and starring South actor Vikram.

The star-studded launch event was attended by superstar Rajinikanth, who beamed and clapped with Shankar as Mr Schwarzenegger made his proclamation from the stage.

Vikram, who performed at the event costumed and made up as a werewolf - which is one of the roles he plays in the SFX heavy I - had a little speech prepared for Arnold Schwarzenegger. "Sir, it is such an honour to have you here. You won't believe the legion of fans you have all over India, who are crazy about you," he said.

Among the other characters Vikram plays in the film is that of Mr Tamil Nadu, inspired by Arnold Schwarzenegger's days as a bodybuilder and Mr Universe. The launch event also included a bunch of local bodybuilders flexing muscle on stage. I, releasing this Diwali, also stars actors Amy Jackson and Upen Patel, and has a soundtrack composed by A R Rahman.