Baahubali poster: The second part of the period drama will track the love story of Devasena and Amarendra Baahubali, and hold your breath for just a glimpse of it 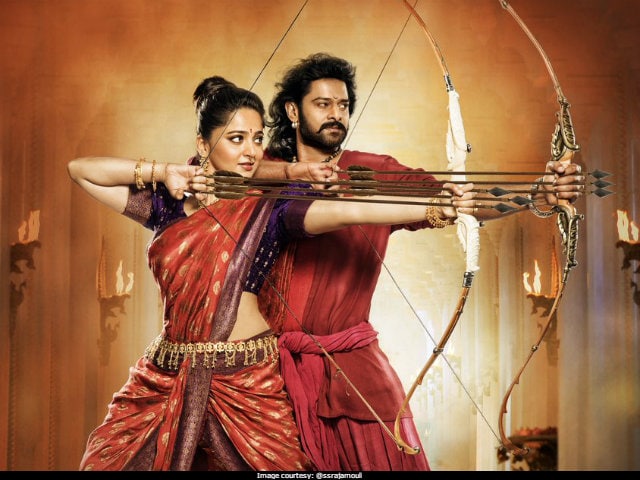 Baahubali 2 poster: The film will release in April (courtesy: ssrajamouli )

Baahubali director SS Rajamouli drove our mid-week blues away. Anybody visiting his Twitter page on Thursday will become an extremely happy soul as he shared a new poster of Baahubali 2, featuring Anushka Shetty and Prabhas. Anushka will feature as the younger version of Devasena while Prabhas stars as Amarendra Baahubali - father of Mahendra Baahubali. Baahubali 2 is actually a prequel to 2015's Baahubali: The Beginning and promises to solve many mysteries when it releases. After all, we still don't know Katappa ne Baahubali ko kyun maara! Baahubali: The Beginning achieved the status of a blockbuster after it released in July 2015 and continues to be the highest grossing South Indian film.
Before you take a look at the poster, here's a little backstory. In the first part of the magnum opus, Prabhas featured as the abandoned and orphan Shiva, who was later recognised as Mahendra Baahubali by Katappa. Rana Daggubati played Bhallala Deva, the tyrannical king of the ancient kingdom of Mahishmati and Katappa is his most trusted accomplice. Mahendra is the son of Amarendra Baahubali, who was in love with warrior queen Devasena. After Amarendra won a massive battle against enemies of the kingdom, he was declared the emperor of Mahishmati. Subsequently, he was killed and Devasena was thrown into prison by Bhallala Deva, who is the primary antagonist in Baahubali.
The second part of the period drama will track the love story of Devasena and Amarendra Baahubali, and hold your breath for just a glimpse of it. "Amarendra Baahubali with Devasena. From one of the most artistic sequences in Baahubali 2," wrote Rajamouli when he shared the posters on Twitter.


Amarendra Baahubali with Devasena. From one of the most artistic sequences in #BAAHUBALI2. #WKKB. pic.twitter.com/TdN3DfWqJA

Rana Daggubati's reprised look as the younger version of Bhallala Deva was released on his birthday - the internet went into a meltdown.

Along with Rana Daggubati, Prabhas and Anushka Shetty, actors Ramya Krishnan and Sathyaraj will also reprise their roles in Baahubali: The Conclusion.
Talking about his blockbuster series of films, SS Rajamouli told news agency PTI: "Making second part was much easier than first one. For the first part, we had confidence but we were not sure how people will receive it. We had confidence in the subject."
Baahubali: The Conclusion will release on April 28 in Tamil, Telugu, Malayalam and Hindi.