"Baahubali, 67 years later, has beaten the magic created by Mughal-E-Azam on screen. Rajamouli's cinema has soul, his personality has gumption and I don't think I even have ten percent of it," said Karan Johar 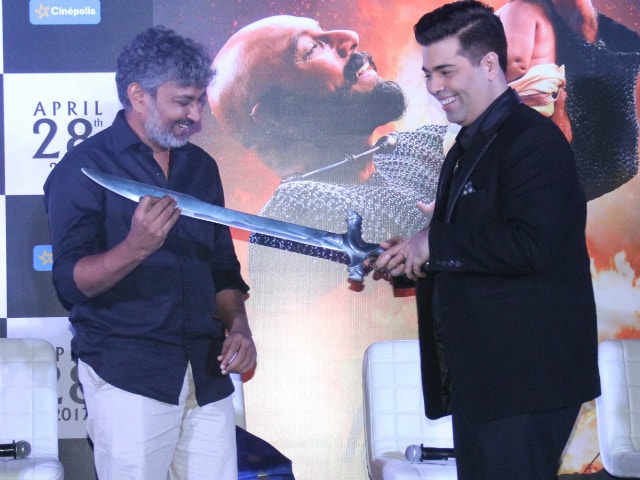 Karan Johar and Rajamouli photographed at the trailer launch

Filmmaker Karan Johar attended the pre-release event of S S Rajamouli's Baahubali: The Conclusion on Sunday evening and said that Baahubali has managed to surpass the charm of Bollywood's cult movie Mughal-E-Azam, reported news agency IANS. Karan, whose Dharma Productions is in charge of the Hindi version of Baahubali, also said that Rajamouli's "gumption" is unparalleled. "Baahubali, 67 years later, has beaten the magic created by Mughal-E-Azam on screen. Rajamouli's cinema has soul, his personality has gumption and I don't think I even have ten percent of it," IANS quoted Karan as saying. Karan was speaking at the pre-release event held at The Ramoji Film City in Hyderabad.
At the event, Karan was introduced on stage with the words "The man who dons many hats." Karan said he was "amazed," reported IANS. "This is the biggest movie event in the history of Indian cinema and I have to say I'm amazed. This is pure dedication, pure strength and this is what I want to go back and teach."


The man who dons many hats, to us - presenter of the hindi version of our movies, @karanjohar! @DharmaMovies#Baahubali2PreReleaseEventpic.twitter.com/HXqCYnPc8g

Baahubali producer Shobu Yarlagadda also thanked Karan for coming on board Baahubali. "We went to Karan Johar to take Baahubali out of Tollywood. When he saw the film, he could see the potential in it. Since he believed in the film and put his name on it, we could conquer Bollywood market. Thank you, Karan Johar, for being a part of this journey," he said.
The pre-release event of Baahubali: The Conclusion was a blockbuster one with actors Prabhas, Rana Daggubati, Tamannaah Bhatia, Ramya Krishnan and Anushka Shetty in the celeb line-up.
Baahubali: The Conclusion, which has already made Rs 500 crores through distribution and satellite rights, is scheduled to release across 6,500 screens on April 28.
(With IANS inputs)