"It was 15 years ago when I first saw a film in IMAX format. In our childhood, we used to see films on 70mm screens and then suddenly we got this larger than life experience in IMAX, through which we literally felt like being in that space and time itself," said director S S Rajamouli 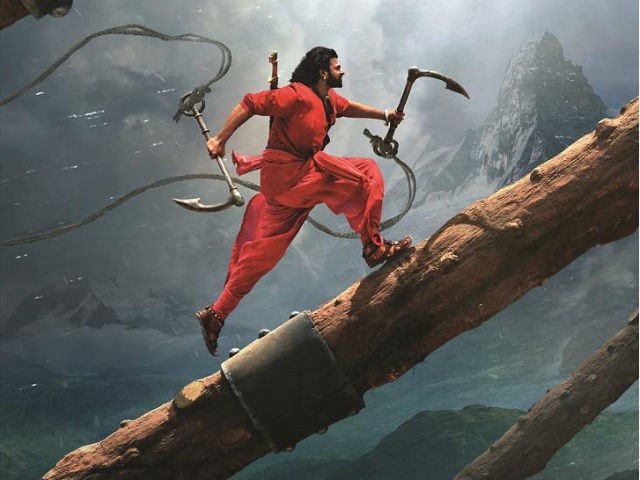 Baahubali: A poster of the film

Baahubali director S S Rajamouli, who wants the much-awaited second part of the franchise to be "bigger" and "better" and at par with big Hollywood favourites, said that he had harboured the idea of releasing a film of this stature on a greater scale and in IMAX format for some 15 years now, reported news agency IANS. Baahubali: The Conclusion, a sequel to Baahubali: The Beginning is all set to hit screens on April 28, ahead of which, the director revealed what made him conceptualise the idea of releasing his ambitious historical dramas in a scale "larger than life". "It was 15 years ago when I first saw a film in IMAX format. In our childhood, we used to see films on 70mm screens and then suddenly we got this larger than life experience in IMAX, through which we literally felt like being in that space and time itself. So the first image I saw and I decided to make my films in IMAX format. And today, when the dream has got fulfilled, it's a quality moment for me," said Rajamouli, who was speaking at the IMAX poster launch of the film in Mumbai, reported IANS.
The digitally re-mastered version of Baahubali: The Conclusion will arrive across 6,500 screens, releasing in Telugu, Tamil, Hindi and Malayalam as the director wants the film to be available to a maximum number of audience. "We have big theatres now but we still need more number of theatres to take the audience there. It's a business model now to release the film in maximum number of theatres to get maximum viewership. And for a film like Baahubali, where people are anticipating so much about the movie that trailer of the film has crossed 100 million views is on par with any Hollywood film. So, it makes all sense to release the film at maximum number of theatres," IANS quoted Rajamouli as saying.
Baahubali: The Conclusion is also a much needed instalment of the franchise as it promises to reveal the mystery behind the cliff-hanging moment - in which senapati Katappa killed Baahubali - with which the curtains were drawn on the first part. Baahubali 2 reunites the original cast of the film with Prabhas, Rana Daggubati, Ramya Krishnan, Tamannaah Bhatia, Anushka Shetty and Sathyaraj reprising their roles. Prabhas, however, will be seen dual roles as will represent the two generation of Baahubali - father Amarendra and son Amarendra. Talking about the 37-year-old actor, Rajamouli said: "The whole film Baahubali was possible because of Prabhas, who being a lead actor in the south film industry, believed in this project and gave three and half years of his life to the film. I don't think anybody can get so much involved in the project with that kind of passion, time and commitment," reported IANS.
S S Rajamouli, who is considered as one of India's most celebrated directors, said that Baahubali is the culmination of each components of the team put together. "I think whether director or producer or any other professional involved in it, we are all being carried on a big ship called Baahubali. Baahubali is the ultimate product and we are the people who worked on it, so I don't think I am a bigger person than the project," IANS quoted Rajamouli as adding.
Team Rajamouli recently re-released Baahubali: The Beginning as part of promotional strategy for the second part, whose Hindi version will be distributed by Karan Johar's Dharma Productions.
All said and done, we just can't wait for Baahubali: The Conclusion to arrive at the theatres. Can you?
(With IANS inputs)