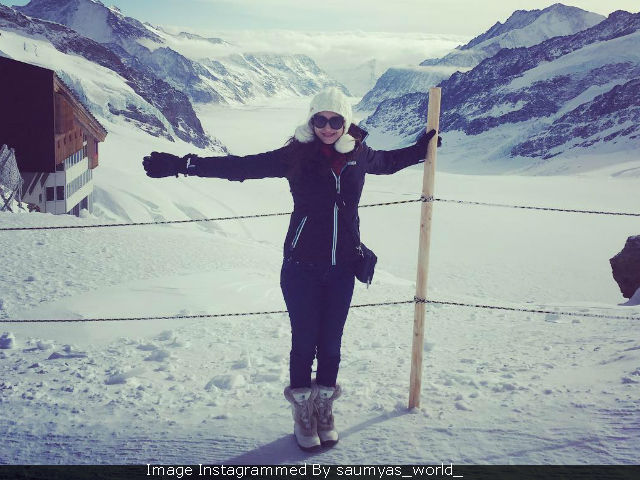 Saumya Tandon made her television debut in 2006 (Courtesy: saumyas_world_)

Television actress Sauyma Tandon, who currently features in Bhabi Ji Ghar Par Hai, is enjoying her honeymoon in Switzerland. The 32-year-old actress married her long-time boyfriend and a banker by profession Saurabh Devendra Singh in a private ceremony in Mumbai in December last year. However, Saumya never opened about her marriage. In an interview to Bombay Times, she said, "I have no comments. I don't want my life to be a question-answer session for people. What I do in my personal life is not for people to know." Saumya, who is a private person, recently shared some pictures from her honeymoon on social media and confirmed that she is married.
Sharing a picture on Twitter, she wrote: "Became kids again in r 1st skiing class. Learning, Falling, rising, together. In a new class of life with marriage hope v hav fun along d way." (sic)


Became kids again in r 1st skiing class. Learning,Falling,rising, together. In a new class of life with marriage hope v hav fun along d way pic.twitter.com/QCVlPj36mD


And just conversations were not enough I had to come and hug my new friend #mountaintoblerone #switzerland .

And when you wake up to this , you wonder whether you are in a dream in your sleep still. #swtizerland_vacation

And I talk to the mountain from my window, #switzerland

Saumya, who made her television debut in 2006 with Aisa Des Hai Mera, currently plays Anita Bhabhi in Bhabhi Ji Ghar Par Hai. Talking about her role, Saumya earlier told news agency IANS, "I am the boldest bhabhi on Indian television. The other bhabhis that you see are all cliched and stereotypical. I play someone who is a little naughty and bold."
She has also acted in Kareena Kapoor and Shahid Kapoor's 2007 film Jab We Met, where she played Roop, Kareena's sister. She told IANS, "After Jab We Met, I got so busy doing TV shows, that I didn't get time for films. I received one or two offers, which I felt could have been good, but I didn't receive any offer which could be exciting enough to force me to leave everything for it. However, she said that she wants to work in Bollywood. "I am open to do films. But for that to happen, somebody needs to offer me an exciting role."Last year, Saumya attended the 69th Cannes Film Festival.
(With IANS inputs)