Dhanush is 'Excited' About 'Hollywood Debut' with Uma Thurman 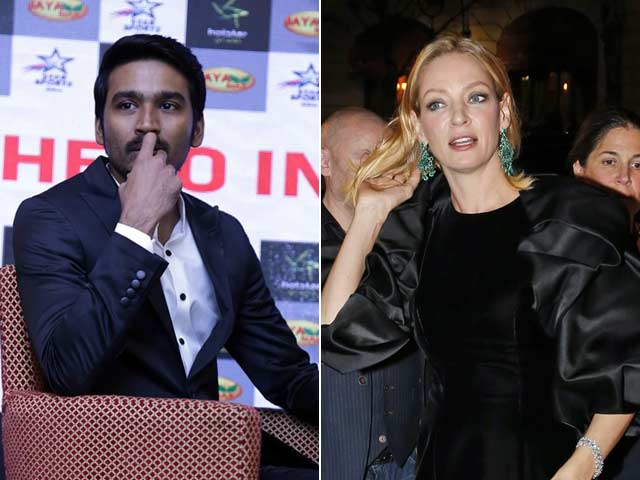 The image on the left was shared by DhanushKRaja and (right) Uma Thurman photographed at a dinner in Paris. (Image courtesy: AFP)

"I am very excited by this opportunity to work in a full length Hollywood film - The Extraordinary Journey Of The Fakir Who Got Trapped In An Ikea Cupboard for the first time. The director Marjane Satrapi felt I would be apt for this role and I feel there are many facets I can explore for this character," Dhanush wrote on Facebook

Actor Dhanush, who is "excited" about his role in Iranian-French director Marjane Satrapi's The Extraordinary Journey Of The Fakir Who Got Trapped In An Ikea Cupboard, will start filming the movie from June, revealed a source.
"Dhanush will start shooting for his portion of the film from June 15. He is expected to shoot for nearly three weeks. The film will be shot in Italy, Morocco and France (apart from India)," a source close to Dhanush told IANS.
He will be sharing the screen space with Kill Bill star Uma Thurman in the film, which is a comedy-adventure tale based on Romain Puertolas's bestselling debut novel with the same name. The book came out in 2014 and has been translated into 35 languages so far.
Dhanush shared his excitement on Facebook.

I am very excited by this opportunity to work in a full length hollywood film - The Extraordinary Journey Of the Fakir...

The novel on which the film is based, relates to the pilgrimage of a con-man from India to an IKEA store in Paris, which turns into a philosophical odyssey. (Also Read: Dhanush Will Reportedly be Stuck in an Ikea Cupboard With Uma Thurman)
The film will follow his journey from New Delhi to Paris where he falls in love with a woman and accidentally gets deported along with a band of African refugees to the far corners of Europe against his will.
The film will also feature Bandit Queen actress Seema Biswas, Alexandra Daddario, Barkhad Abdi and Laurent Lafitte.