Dhanush's VIP 2: It will be helmed by Soundarya, Rajinikanth's younger daughter 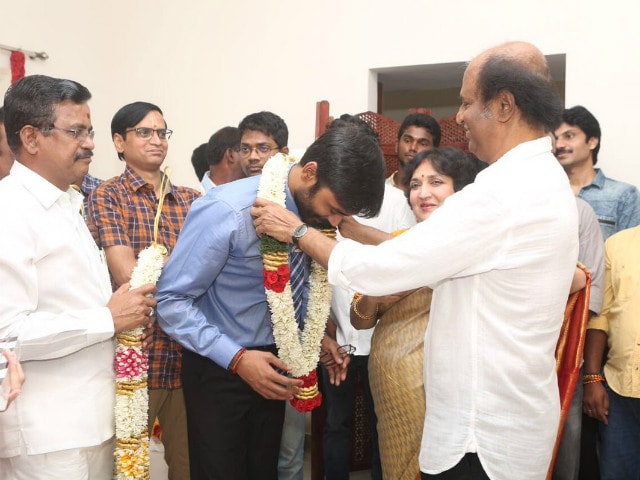 Rajinikanth's son-in-law, South star Dhanush, kicked off the sequel of his 2014 blockbuster film Velaiyilla Pattathari, popularly known as VIP, with the blessing of none other than the Thalaivar on Thursday. The puja that marked the launch event in Chennai was a star-studded affair - apart from Dhanush, Rajinikanth was accompanied by wife Latha, daughter Soundarya and actress Amala Paul, who is the leading lady in the film. Kabali producer Kalaipuli S Thanu, whose V Creations will back the film, was also present. VIP 2 releases in both Tamil and Telugu. VIP 2 will be helmed by Soundarya, Rajinikanth's younger daughter. Dhanush is married to Aishwaryaa R Dhanush, who directed him in 2012 Tamil film 3.
This is how Rajinikanth blessed Team VIP 2:

"Thank you Amma and Appa for blessing the team," Aishwaryaa, who was not part of the puja, wrote on Twitter when she shared pictures:

Aishwaryaa also made an interesting revelation - actress Kajol will also be part of the sequel to VIP. With VIP 2, Kajol will make a comeback to Tamil films after two decades. Kajol's first Tamil project was Rajiv Menon's 1997 film Minsara Kanavu - a romance co-starring Arvind Swamy.


Am so excited and honoured to be working with the @KajolAtUN mam in #Vip2 .... always been such a big Kajol fan #BackInTamilAfter20years

With VIP 2, Dhanush will reprise his role as Raghuvaran, a character who portrayed the transition from an unemployed graduate to a successful civil engineer. In the teaser released in early November, only a silhouetted Dhanush was featured against a sketchy construction site.


Very happy to announce our next project with @dhanushkraja and @soundaryaarajni#VIP2#RaghuvaranIsBackpic.twitter.com/nR2DxbADfy