Malayalam actor Dileep married Kavya Mahadevan, in a private ceremony in Kochi on Friday, actor Mammootty reportedly attended the do 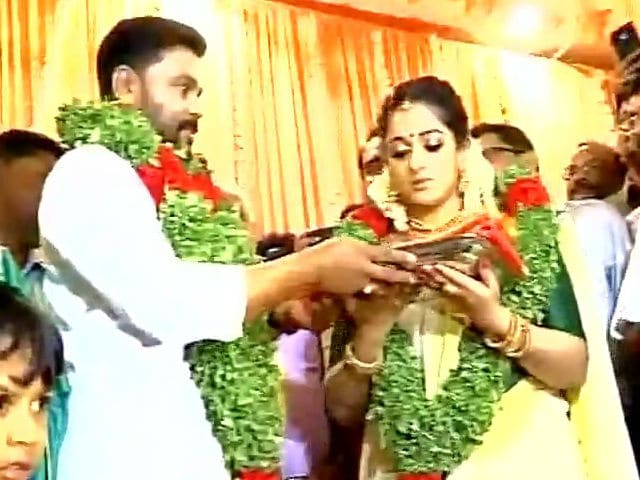 Malayalam actor Dileep married actress Kavya Madhavan, his co-star of films like Mizhi Randilum and Vellaripravinte Changathi in a private ceremony in Kochi on Friday. The actor couple decided to get married at a short notice and only family and close friends were invited to the do. After the ceremony, Dileep and Kavya talked to the media and hoped for everyone's best wishes. Dileep said that his daughter (from his previous marriage to Manju Warrier) had given her consent and urged everyone to not spread negative reports about them again. "Please don't spread negative reports again about us. We have been going out for some time and then we were asked why are we not getting married. Then I asked my daughter, who said yes. In my life she (Kavya) was never a problem. I decided that I will marry her as her life had problems because of me and that's how we decided to marry," Dileep told the media, reports news agency IANS.
"Please pray for us as we both need to have a good life ahead and we feel that many wished this to happen," Kavya added.
Meanwhile, Mammootty, Jairam and Meneka were among their colleagues from the Malayalam film industry who were invited to the wedding. "I did not know about this, till a few hours back. My husband (producer Suresh) told me that he has to visit a temple. Maybe he knew. Anyway this is good news for all of us," said Maneka told IANS.
Very close friends knew that Dileep and Kavya had planned to get married today. "Only those very close to the couple are here today and this has happened with the support of both the families," said Ranjith, a producer and husband of actress Chippi at the marriage venue, reported IANS.
Film critic Sreedhar Pillai tweeted pictures from ceremony, which was also live streamed and congratulated the couple.


#Dileep-#KavyaMadhavan are now married. Happy married life and all the best. pic.twitter.com/sgpTlgs8Mr

Dileep was married to actress Manju Warrier from 1998 to 2015. Their divorce proceedings finalised last year. Dileep has a daughter a 15-year-old daughter Meenakshi with Manju. Meanwhile, Kavya Madhavan was married to computer engineer Nishal Chandra from 2009-2011. She quit acting after marriage for a while and shifted to Kuwait with her husband. But she returned after a few months and filed for divorce a year later.
Dileep and Kavya Madhavan first film together was 2000 film Darling Darling, which was a huge success. They went on to do nearly 20 films together including Sadanandante Samayam, Thilakkam, Valayar Paramasivam and Paappi Appacha. They were last seen together in Pinneyum, which was released in August, 2016.
(With inputs from IANS)