For Kabali, Mumbai's Rajini Fans Lined up Outside Aurora Talkies at 4 AM

"Whenever Rajini sir's film releases, I come to Aurora theatre because there is a different type of Rajinikanth fans mania here. I can see his jalwa here and I try to watch his films here. I had watched Robot and Sivaji: The Boss here," Madhur Bhandarkar told NDTV 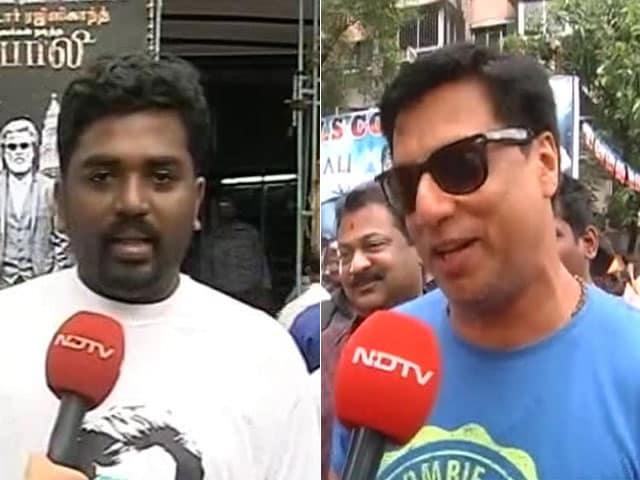 A Rajinikanth fan (L) and Madhur Bhandarkar (R) in conversation with NDTV.

If Chennai is the nerve centre of Rajinikanth mania, a satellite version exists upcountry in Mumbai. The Aurora Talkies theatre in Matunga, Mumbai is a mecca for the city's Rajini fans and they lined up before dawn on Friday to watch the first of the day's six shows of Kabali, the 65-year-old superstar's new film. Aurora Talkies, run by Rajinikanth super fan Nambi Rajan, scheduled the first of its Kabali screenings for 6am - ticket-holders, however, had lined up by 4 am. Day had not yet broken but the mood outside Aurora was upbeat. Fans wearing Rajinikanth T-shirts turned the scene into a party, conducting poojas and bike rallies.
Among those watching Kabali at Aurora was filmmaker Madhur Bhandarkar, who told NDTV that there was no place else he'd rather be. "Whenever Rajini sir's film releases, I come to Aurora theatre because there is a different type of Rajinikanth fan mania here. I can see his jalwa here and I try to watch his films here. I had also watched Robot and Sivaji: The Boss here," the 47-year-old director of Corporate and Fashion said.
To watch Kabali at Aurora Talkies, Mr Bhandarkar had to postpone a trip to Delhi, scheduled for Friday.
"I stayed back because I have never seen this kind of a scenario outside a theatre anywhere else. This madness. People are so excited. And I am a very big fan of Rajinikanth. So I really like to watch his films here," Madhur Bhandarkar said.
Tickets at Aurora theatre are sold out till Sunday but Mr Bhandarkar is connected.
"The manager is my friend. He knows that I come here every year to watch Rajini saab's films. So I requested him that I need two-three tickets. So he said, 'Aap toh hamesha aate ho. No problem, Madhur ji. Ho jaayega, aap aa jaaiye.' Nahi hua toh main khade hoke dekhunga," said an excited Mr Bhandarkar, while crowd whistled and hooted.
Madhur Bhandarkar also added that Rajinikanth has fans all over the world and not only in Tamil Nadu.
"Rajinikanth's entry in a film, his style is fantastic. We've been watching him ever since. We are a huge fan of Andhaa Kanoon. Rajinikanth was, is and will always remain the superstar," he added.
Watch:


On my way to watch 1st day 1st show of #Kabali at Aurora Theatre,Matunga & excited be a part of @Rajnikanth#maniapic.twitter.com/tKy4gNHkd3

This year, the traditional milk abhishekam for Rajinikanth films has been excluded from party plans.
"We have booked a Kabali t-shirt and had made a campaign of Kabali. As Rajini sir had already told, there should not be any idol worship and there should not be any pouring of milk on his stills and cutouts. So we have maintained that. No pouring of milk and everything," a fan outside Aurora Talkies told NDTV while describing how they prepared for the first show.

Reviews from the cine-goers were encouraging. "The movie is brilliantly awesome. It has emotions, fights and it has all those scenes which a Rajini fan expects. It has those super moments where every Rajini fan will start clapping and whistles loud. So the movie has everything. There was absolutely no disappointment," said a fan after watching the film. And what does it matter anyway? "A perfect, pure Rajini fan will always enjoy whatever he does," said fans.
Kabali stars Rajinikanth as a Malaysia-based mafia don with Radhika Apte playing his wife.
Watch: