Sridevi's Tribute To J Jayalalithaa On Twitter With Old Photo

The film was 1971's Tamil devotional Aathi Parashakti, in which Jayalalithaa played the lead role of Goddess Sakthi, opposite Gemini Ganesan as Lord Shiva. Sridevi, then a child artiste, appeared as Lord Murugan. Now 53, Sridevi recalled Jayalalithaa as "articulate, dignified, cultured and caring." 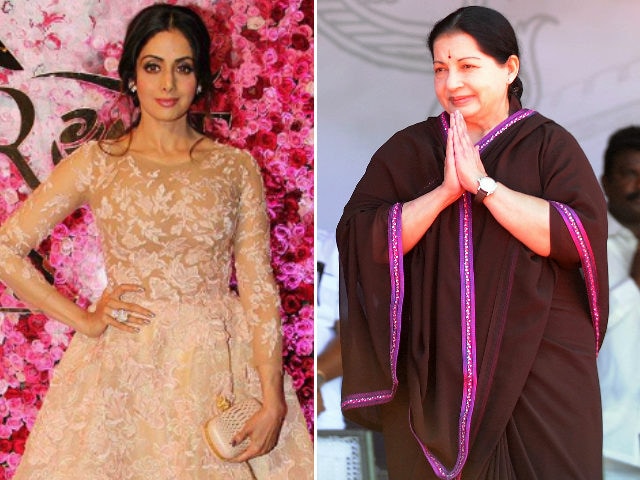 Sridevi in Mumbai (L) and (R) a file photo of Jayalalithaa (courtesy: AFP)

Among the many tributes paid to Tamil Nadu Chief Minister J Jayalalithaa is one from actress Sridevi, who tweeted an old film still of herself with Jayalalithaa, a former actress, two days after her death. Jayalalithaa, fondly addressed as 'Amma' by her followers, died in a Chennai hospital on December 5 after a prolonged illness. She was 68. Much before she became a politician, led the AIADMK and eventually became chief minister of Tamil Nadu, Jayalalithaa starred in over 140 films. She was a leading actress of her time and worked with many top heroes of the South Indian film industry. Sridevi, who began her career in South films before moving to Bollywood, appeared with Jayalalithaa in a single film. She posted a recollection of her co-star with the film still.
The film was 1971's Tamil devotional Aathi Parashakti, in which Jayalalithaa played the lead role of Goddess Sakthi, opposite Gemini Ganesan as Lord Shiva. Sridevi, then a child artiste, appeared as Lord Murugan. Now 53, Sridevi recalled Jayalalithaa as "articulate, dignified, cultured and caring."


The most articulate dignified,cultured & caring lady, lucky to have worked with her. I Along with millions of our people will miss her. pic.twitter.com/ol49dfkyhw

A day earlier, she tweeted:

Tamil superstar Rajinikanth - Sridevi's co-star of several films and whose movie Billa was reportedly rejected by Jayalalithaa - also tweeted after the politician's death. He wrote: "Not just Tamil Nadu but India has lost a brave daughter. I pray to God to rest her soul in peace."
Other tributes pured in from Amitabh Bachchan, Hema Malini (whose husband Dharmendra co-starred with Jayalalithaa in her only Hindi film, 1968's Izzat) and Rishi Kapoor.


T 2463 - Jayalalitha ji the only CM of a State that celebrated 100 years of Indian Cinema .. from all regions .. most admirable ! pic.twitter.com/W2pcsVKhYL

V upset to hear abt Jayalalitha's passing away. She was strong,had tremendous will power & carved a special niche for herself in politics.

Tamil Nadu admired & adored her as did people all over India. She was a much respected leader, who held her own in a world of men. RIP Jaya!