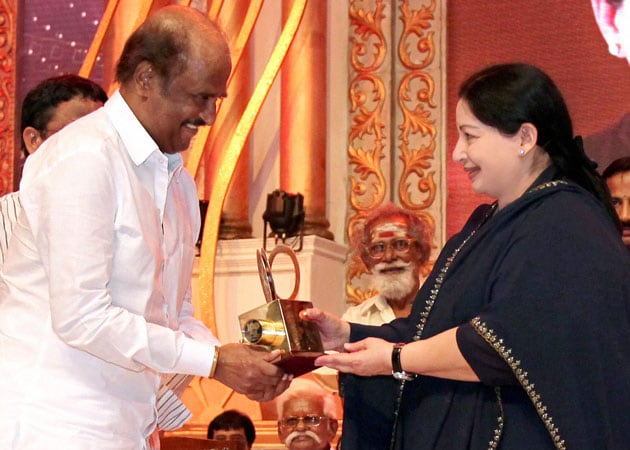 A total of 59 legends of Tamil film industry were felicitated by Tamil Nadu Chief Minister J Jayalalitha at the centenary celebrations of Indian cinema here on Saturday.

A total of 59 legends of Tamil film industry were felicitated by Tamil Nadu Chief Minister J Jayalalitha at the centenary celebrations of Indian cinema here on Saturday.
The four-day mega event (Sep 21-24) kicked off on Saturday.
Jayalalitha, who was the chief guest of the evening, honoured all the awardees with a miniature model of bioscope for their contribution to Tamil cinema.
From direction to production to acting to music composing, members from different crafts of cinema were bestowed upon with the award.
In the actors' segment, yesteryear stalwarts such as S S Rajendran, Manorama, M.N Rajam, Rajashree, Sharada, Kanchana, Jamuna, Krishakumari, Sowcar Janaki, Jayaprada, Jayasudha, and Sivakumar were awarded.
Current generation actors such as Kamal Haasan, Rajinikanth, Trisha Krishnan, Meena, Simran and Vivek were too honoured.
J. Mahendran, C.V Rajendran and P. Vasu were honoured for their contribution as directors to the industry over the years.
Singers such as L.R Eswari, M.S Rajeshwari and Jamuna Rani with music-violinist M. Ramasubramaniam and singer-composer Illayaraja were awarded too.
Renowned producers such as Saravanan of AVM group, Venkat Ram Reddy of Vijaya productions, Ramesh Prasad of Prasad lab & studios and R.B Chaudhary were also conferred the award.
Technicians such as Suresh (Anand Pictures Circuit), Jawahar (Delight Theatres, Coimbatore), Pulamaipithan (Lyricist), Aroor Das (Writer), N.S Varma and Babu (Cinematographers), R. Vittal (Editor) and Sundaram (Choreographer) were awarded.
Delivering the presidential address, Jayalalitha looked back at her own days as an actress.
"When I was an actress, celebrating 100 days run of a film at the box-office was considered a rare achievement. Today, we are celebrating the centenary year of Indian cinema, and it is indeed a very special moment for all of us," she said.
Jayalalitha was one of the reigning stars of yesteryear. She made her cinematic debut at the age of 15.
She even remembered some of the biggest contributors to Indian cinema.
The list includes names such as M.G Ramachandran, Sivaji Ganesh, Gemini Ganeshan, N.T Rama Rao, Akkineni Nageswara Rao, Relangi, S.V Ranga Rao, Gumadi Venkateswara Rao, Prem Nazir, Satyan, Rajkumar, Dev Anand, Rajesh Khanna, Raj Kapoor, Mohammed Rafi, Kishore Kumar, Naushad, Laxmikant-Pyarelal, Naushad, Asha Bhonsle, Lata Mangeshkar, T.M Soundarajan, P.B Srinivas, Vishwanathan-Ramamurthy and Ghantasala among many more.
"Indian cinema is incomplete without the contribution of all these legends. Cinema has been an important part in all our lives over the years and I wish it continues to hold a special place. I wish we celebrate another century of Indian cinema too," she added.
Also present at the event were several stakeholders of south Indian film industry.
C. Kalyan, president, South Indian Film Chamber of Commerce speaking on behalf of south Indian film industry extended his gratitude to the chief minister.
"This event wouldn't have been possible without the support and guidance of our chief minister. I would like to thanks her on behalf of our industry and request her to continue supporting us," he added.
The evening was dedicated for the celebration of Tamil industry. All the popular actors such as Vikram, Ajith Kumar, Vijay, Dhanush and many more were present.
Post the inaugural ceremony; gala cultural performance was rendered by cine stars of south celluloid world for the audience at Jawaharlal Nehru stadium.
President Pranab Mukherjee will preside over the valedictory on September 24.