Kajol And Dhanush Are Trending. Here's The Reason For The 'VIP' Treatment 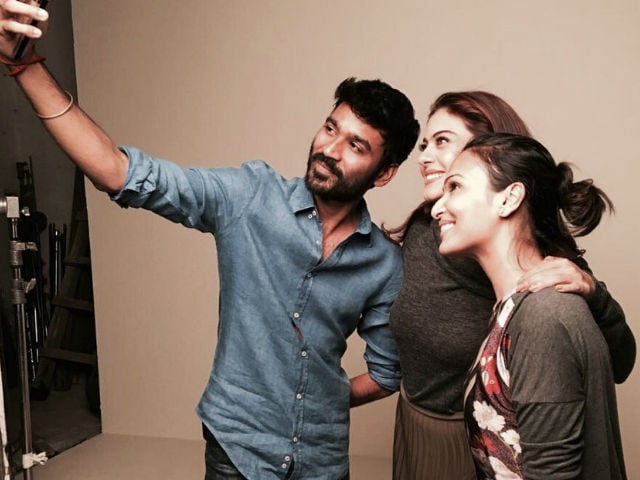 Bollywood star Kajol, who has completed 25 years in the film industry, is all set to return to Tamil cinema after two decades. The 42-year-old actress will collaborate with Tamil superstar Dhanush and director Soundarya Rajnikanth for upcoming film VIP 2, a sequel to Dhanush's 2014 hit film of the same name. A photoshoot featuring the trio is now viral as firstly, fans are super excited to see Kajol's return to Tamil cinema and secondly because Dhanush is back as Raghuvaran. Kajol returned to the big screen after five years in Rohit Shetty's 2015 film Dilwale opposite Shah Rukh Khan.
Kajol shared a picture with her 'new team' on Twitter:


#PhotoShoot with the one and only @KajolAtUN mam & our very own #Raghuvaran@dhanushkraja can't get better than this !!!! #Vip2pic.twitter.com/cFd8YaVkRm

VIP 2 is Soundarya's second film as director. The graphic designer debuted as director with Kochadaiiyaan which used the photorealistic motion capture film and starred her father, Rajinikanth and actress Deepika Padukone.
Soundarya was 'super excited' and tweeted:


@soundaryaarajni my pleasure entirely. Lookin forward to doing some awesome work together ;)

Rajinikanth took the clapboard to start the film a few days back and an excited Dhanush shared pictures:


What more can i ask ?? #thanksthalaiva with all your blessings #vip2 kick starts from today. #raghuvaranisbackpic.twitter.com/dtTthGtkGS

Dhanush is also gearing up for the sequel of another blockbuster - Maari. Director Balaji Mohan has sent the final draft of Maari 2 script to Dhanush:


Guess what I got :) final draft of Mari 2 script from @directormbalaji !! #hewillbeback#donudonudonu#senjiruvenpic.twitter.com/iihDRcZdHu

Meanwhile, Kajol also has a film with Ship of Theseus director Anand Gandhi up her sleeve.