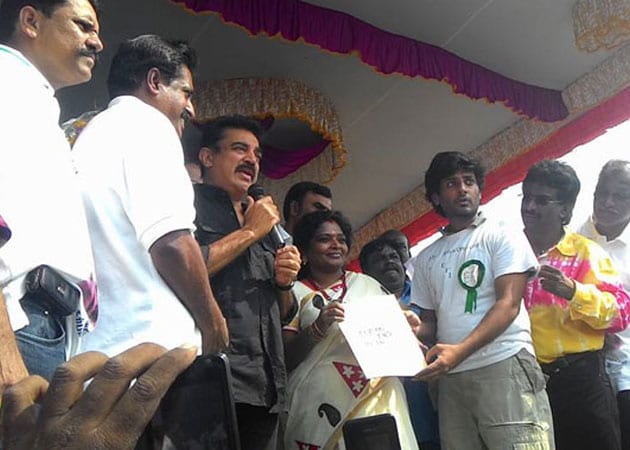 This image was posted on Facebook by Kamal Haasan

That's the way he 'lakes' it! Actor-filmmaker Kamal Haasan, who has decided to help in the cleaning up of 25 lakes in Tamil Nadu in support of Prime Minister Narendra Modi's Clean India campaign, says such efforts can only make an impact with right guidance.

While several actors of the Hindi film industry took to the broom on the streets for the Swachh Bharat campaign, Kamal announced plans that the volunteers of his 'Narpani Iyakkam' (Welfare Club) will drive the cleaning of the lakes. The announcement was made on his 60th birthday Friday.

"That's how I spent my 60th birthday on Friday. Cleaning the lakes, which is a good beginning, I think, for a cleaner country. We've got environmentalist Arun Krishnamurthy on board to help us with the campaign," Kamal Haasan said.

"There is no point in doing anything randomly for the environment. For any such campaign to make an impact on the environment, we need proper guidance," said the superstar, who discourages his fans from celebrating his birthday in a pompous way.

He has even reached out to his fans to drive the campaign.

"I've told my fan clubs to do whatever they can in the way of social causes. Beyond that, I strictly forbid them from celebrating my birthday with cakes and singing. At 60, even your fans need to sober down," he said.