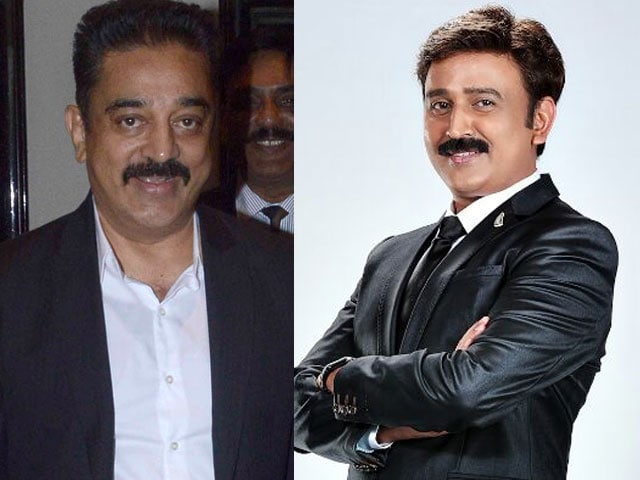 Actor-filmmaker Ramesh Aravind says he will forever cherish the experience of directing the Tamil drama Uttama Villain, starring Kamal Haasan, since he feels it has made him a better human being.
"You learn a lot when you work on a big project like 'Uttama Villain'. You learn about others, you learn about human relations and its importance in the process of filmmaking. At the end of this journey, I think I've not only become a better technician, but I've become a better human being too," Aravind told IANS.
The film, which is about the life of a superstar with and without a mask, releases worldwide on Friday.
"The film is about the feelings of a superstar; his journey and emotions. It shows that there could be an Uttaman (respectable man) in a villain and vice versa too," he said.
Ramesh Aravind and Mr Haasan, who worked together in the 2005 Kannada film Rama Shama Bhama, were to team up soon after, but things didn't materialise.
"Kamal and I were to collaborate for a Hindi project which never materialised. We also planned to do a Tamil film, but things just didn't fall in place. Meanwhile, I got busy with my commitments in Kannada industry. In March 2013, Kamal asked me to direct this script," Ramesh Aravind said.
"And at that point, I was looking for a big leap in my career. So the moment I got this offer, I left everything I was doing and shifted my focus. The film has lot of emotional content and it's packed with a profound message which drew me to it," he added.
For fans of Mr Haasan, it has been a long wait for the film. But Aravind is confident about the output.
"It took time because of the many layers involved in the narration. When I saw the first copy, I felt all the layers overlapped nicely. And the output that audiences are going to experience on the big screen, I must say, is going to be great," he said.
He added that the long wait may have raised the stakes for the film as well.
"It could also be the controversies or even Kamal Haasan's return to big screen after two years. All these have certainly had some effect on the stakes. But we're out to give a good film right from the beginning and that much I can assure you," said Ramesh.
Ramesh Aravind said Kamal Haasan has raised the bar much higher in "Uttama Villain".
"I think with every film, he (Kamal) tries to raise the bar higher. Personally, it's a quantum leap for me. The reason I didn't have any distractions and spent the last two years on 'Uttama Villain' was because this was an orbital jump for me," he said.
"In science, when an electron gets excited at one particular energy level, it jumps to the next orbit. I felt like an excited electron and I had to take a quantum jump to reach the higher bar set by Kamal Haasan," he added.
As an actor, Aravind has worked in about 150 films, but he admits the creative high one gets as a director can't be matched.
"I've done a lot of work over the years as an actor and it's always exciting to face the arc lights. But direction is something I've been planning to do for quite some time because of the novelty factor. This is the greatest high of my career. I'm looking forward to more such opportunities," and added that direction is a creative process.
"It gives wings to your creativity. It allows you to create a world you might not envision as an actor," he concluded.