Kamal Haasan's elder brother Chandrahasan suffered a cardiac arrest and died in London. He was at his daughter Anu Hasan's place 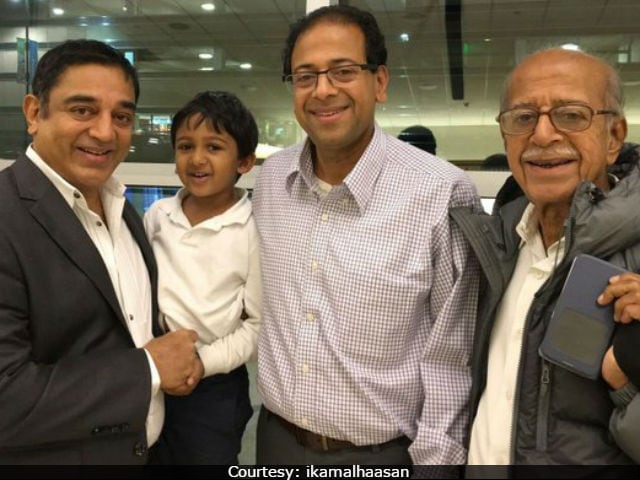 Actor Kamal Haasan's elder brother Chandrahasan has suffered a cardiac arrest and died in London, news agency IANS quoted a source as saying. He was 82. "He was at his daughter Anu Hasan's residence at the time of his death on Saturday," IANS quotes the source. A lawyer by profession, Chandrahasan was also associated with Kamal Haasan's home production banner Raaj Kamal Films International. He was associated with the production of Mr Haasan's films like Hey Ram, Nala Damayanti, Virumaandi and Vishwaroopam. His daughter Anu is an actress and a popular TV host. She made her debut in 1995 with the critically-acclaimed Indira. She has also hosted the celebrity talk show Koffee with Anu. Earlier in 2017, Chandrahasan's wife Githamani had passed away.
Kamal Haasan, 62, is the star of films like Nayagan, Virumaandi, Kanyakumari, Vishwaroopam and Dasavathaaram. He won his first National Award for Best Actor for Balu Mahendra's Moondram Pirai, later reprising his role in the Hindi version, Sadma also featuring Sridevi.
Mr Haasan, who is divorced from actress Sarika has two daughters - Shruti Haasan, 31 and Akshara Haasan, 25 - from his second marriage. Shruti and Akshara are both actors and have done both regional and Bollywood films. Kamal Haasan was earlier married to acclaimed-Bharatnatyam dancer Vani Ganapathy.
He is currently prepping for the highly-anticipated Vishwaroopam 2, in which, he plays the role of a RAW agent Wisam Ahmad Kashmiri whose aim was to destroy the sleeper cells of a terrorist outfit.
In February, the actor tweeted this about the film:


4 all looking forward to VR2. Am personally getting in 2 clear the path. Bigger obstacles are out of the way. Whats left istechnical & legal

Vishwaroopam 2 also stars Rahul Bose, Shekhar Kapur, Pooja Kumar and Andrea Jeremiah. It is written and directed by Kamal Haasan. The first part of the film released in 2013 and won several awards in the south and two National Awards.