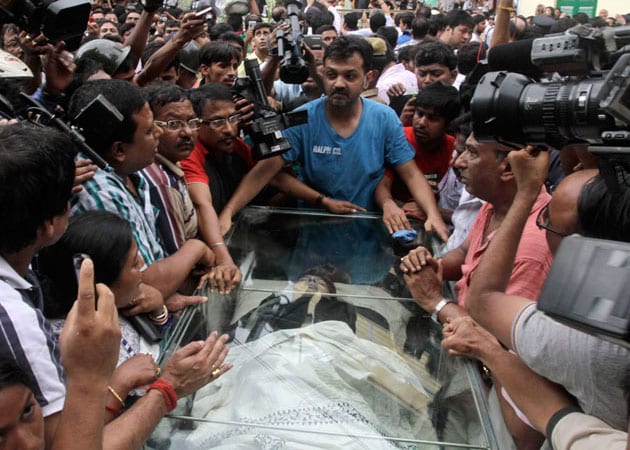 Braving rains, thousands of cine lovers thronged the state-run cultural complex 'Nandan' here to bid a tearful farewell to maverick film maker Rituparno Ghosh who died on Thursday morning battling pancreatitis. People waited patiently as the queue comprising mourners of all ages, a sizable number of them women, stretched about a kilometre.
Songs on death and prayers like Aguner Poroshmoni by Rabindranath Tagore were played to pay respects to Mr Ghosh. Policemen had a tough time managing the crowd which had a sizeable number of LGBTs (Lesbian, Gay, Bisexual, and Transgender), including members of Sapho for Equality, who turned up to pay their respects to the film director who had dealt with the issues of alternative sexuality and never hid his sexual preference.
Mr Ghosh's colleagues and friends from the Tollywood fraternity - directors, actors, producers, singers, lyricists, poets and musicians - stood near the body as people offered floral tributes.
West Bengal Chief Minister Mamata Banerjee was among those who offered wreaths. She was accompanied by her ministerial colleagues Arup Biswas, Boby Hakim and Bratyo Basu, a theatre personality himself, who broke down.
Leader of Opposition in West Bengal Assembly Surjya Kanta Mishra and WBPCC chief Pradip Bhattacharya also laid wreaths and paid their homage to the departed soul.
"Mr Ghosh's untimely demise has created a void in the film industry. We mourn his death," Mishra said.
Acclaimed film maker Goutam Ghosh said, "I couldn't believe my ears when I was told this morning that Ritu (as he was known to the film fraternity) is no more. He cannot go this way...I can't yet believe he is no more around." "He is one person who had shown more sensitivity towards our rights, our anguish and pains. He accorded respect to our identity as humans. He is one who taught us that there is nothing to hide regarding our sexuality," Anandi, a member of LGBT community, said breaking down.
Tollywood superstar Prosenjit Chatterjee, who was cast by Ghosh in Chokher Bali, Shob Choritro Kalponik, Dosor and Utsab, was too overwhelmed to speak when approached. "Please spare me today," he pleaded as he accompanied the hearse on its last journey.
Film maker Raj Chakroborty, one of the most successful current middle-of-the road film makers, said, "Rituda had an abiding interest in our genres of film making."
Ghosh's long-time associate music director Debajyoti Mishra said, "His 'Chitrangada' will one day be accorded its due place in history. The national award vindicates that." Recalling how Ghosh had taken months to research on Tagore before embarking on his docu-feature, Mishra said, "He was a voracious reader and a hard working researcher...He used to go through books and journals, which dated back to centuries."
"Rituda's death is a real shocker. He was an inspiration for young actors and film makers like us. I am numbed with shock and disbelief," Kahani actor Parambrata Chatterjee said.
Sujoy Ghosh, Kahani director who donned the garb of Byomkesh in Ghosh's just shot film 'Satyaneshi', and actor Indraneil Sengupta were among those who paid their respects. The flower-bedecked cortege later left for heritage Technician Studio en route to the crematorium.
Madhabi Mukherjee, who played the title role of Charu in Satyajit Ray's masterpiece Charulata, said, "Bengali film got a new lease of life with Ritu's films at a time when it had come to a point of saturation."