Nagarjuna on Why Amitabh Bachchan Appears in Akkineni Family Film 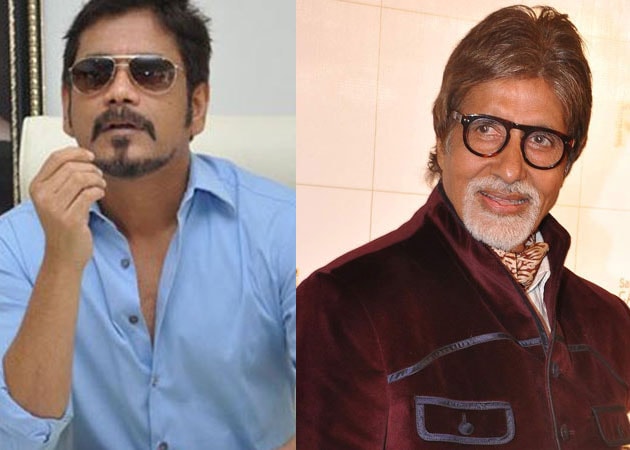 Amitabh Bachchan has made a cameo in Nagarjuna?s upcoming film Manam

Actor Nagarjuna says a cameo by megastar Amitabh Bachchan in his family film Manam, which stars his legendary father, the late Akkineni Nageswara Rao (ANR), and his own son Chaitanya, is an "honour to my father's memory".

Actor Nagarjuna says a cameo by megastar Amitabh Bachchan in his family film Manam, which stars his legendary father, the late Akkineni Nageswara Rao (ANR), and his own son Chaitanya, is an "honour to my father's memory".
Amitabh, who admired ANR greatly, has made a cameo appearance in the film. This is the Big B's first appearance in a Telugu film. (Also read: Nagarjuna: Manam Befitting Farewell to My Father )
Nagarjuna said, "We didn't want Bachchan saab's appearance to be made public. We wanted it to be a surprise. But nothing he does can remain undisclosed. It's just a cameo. I wanted him to honour us with his presence in our family film."
"My father always thought of Bachchan saab as one of the finest actors we have. I thought just having him in my film would be an honour to my father's memory. When I asked him, he immediately agreed."
The heat is on for the release. (Also read: Amitabh Bachchan shoots cameo for Nagarjuna's Manam )
"There is a clamour among Andhra Pradesh exhibitors to release the film. That feels reassuring. But we have to make sure that we don't succumb to the temptation of taking all the theatres at our disposal. We don't want to saturate the market with too many prints," he said.
Is Nagarjuna feeling pressurized?
"When we started making the film, we were not thinking of what other people would think. My grandfather, my son and I wanted to do film together. We're releasing with an unprecedented number of prints on May 23."
"The election results would be out by then. Luckily for us, even the Indian Premier League finals were postponed. So, everyone would be in the right frame of mind to see an important film. I don't think I've ever been so nervous about any film," he said.
Some scenes of Nagarjuna's father could not be completed before his death. But luckily everything that needed to be completed has been taken care of.
"My father had a very sharp sixth sense. He perhaps knew the end was near. He completed all the important portions of the film. Whatever remained was not crucial to the plot," he said.
Now the actor is hopeful of the film's success.
"Whenever I've made a film without thinking of the box office outcome, it has worked. 'Manam' was made purely from and by the heart. It started as a deeply emotional journey for the family. As it progressed, it became more and more precious to us."
Thus, Nagarjuna is nervous about how the film will be received.
"Of course there is an anxiety within me. My father's fans are looking on the film as a farewell to him.
But we're also very confident because all of us have made it from our hearts. Every technician and actor has put his or her.