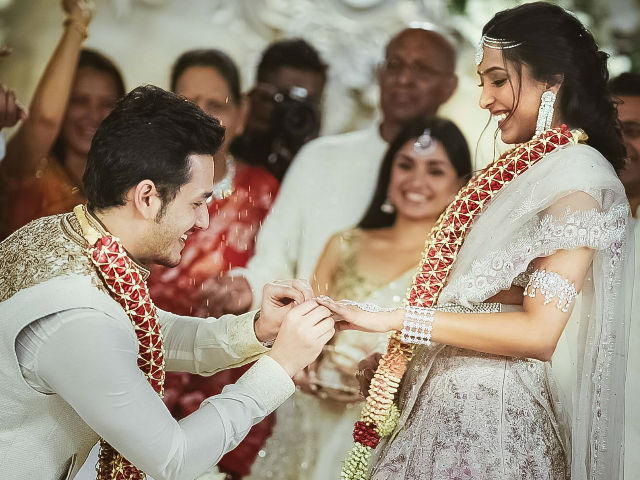 Akhil and Shriya are planning a destination wedding in Italy. (Image credit: Stories by Joseph Radhik)

South actor Akhil Akkineni, son of superstar Nagarjuna Akkineni, got engaged to fashion designer Shriya Bhupal on December 8. The event was a close family affair in Hyderabad and the only actors from the southern film industry at the ceremony were family members. Shriya, who reportedly graduated from Parasons School of Design from New York, is owner of designer label Shriya Som. Bollywood actresses Alia Bhatt, Shraddha Kapoor and Radhika Apte have been frequently spotted in Shriya's creations. Meanwhile, actress Samantha Ruth Prabhu, who is dating Akhil's brother, Naga Chaitanya, was also at the ceremony and shared an image with the couple on Instagram. Samantha wore a Sabyasachi sari at the do.
In the picture, Samantha, Naga Chaitanya and Nagarjuna Akkineni shared the stage with the newly-engaged couple:


A photo posted by Samantha Ruth Prabhu (@samantharuthprabhuoffl) on Dec 9, 2016 at 8:04pm PST

Here's another picture from the event shared by a fan club in which Amala Akkineni also joined in:

Akhil, who made his Telugu film debut in 2015 film Akhil, has reportedly planned a destination wedding in Italy, next year. According to a Times of India report, wedding venues are being checked out in the picturesque European country with a swanky option in Rome to be most likely the one. "Italy is one destination that's on their minds as of now. A recce of sorts was done in Naples, but a fancy venue in Rome could also make the cut," TOI quoted a source as saying. The report also said that 600-odd guests will be flying in to Italy to attend Akhil and Shirya's wedding.
Akhil and Shirya have reportedly been dating for twi years and he introduced Shriya to his parents earlier in June. Akhil will next be seen working with filmmaker Vikram Kumar, who has directed Nagarjuna and Akhil in 2014's Manam.
Meanwhile, Naga Chaitanya and Samantha Ruth Prabhu are planning to get married next year. "I'm a very private person and I never felt the need to speak about my relationship in public. My friends have known about it for a long time. Then, when we informed our families, they supported our decision. We plan to get married next year," Naga Chaitanya told new agency IANS.
Samantha, he said, will continue working after marriage. Naga Chaitanya said he won't stop Samantha from acting after marriage."I don't think I'd ever tell her what she should and shouldn't do. I'm proud of her growth as an actress and I will encourage her to continue working. It was through sheer talent and hard work she got where she is today. I don't think she should throw away her successful career because of marriage," he said.