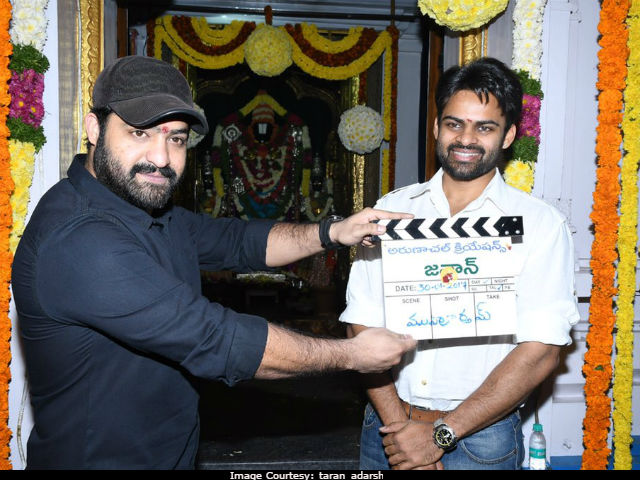 Telugu actor Sai Dharam Tej and Telugu star NTR Junior were spotted together in Hyderabad on Monday, at the launch of the Supreme actor's new film Jawaan. Junior NTR was photographed holding the clap board while the Thikka actor smiled in front of what looks like a temple. Trade analyst Taran Adarsh, who shared pictures from the event, wrote: "NTR Jr sounded the clapper board for Sai Dharam Tej's new film Jawaan." Sai Dharam Tej's Telugu film will be directed by B V S Ravi, who has previously helmed 2011's Telugu movie Wanted, which remains his only film as director. Sai Dharam Tej was last seen in 2016's Thikka.
Sai Dharam Tej, who is the star of films like Subramanyam For Sale and Rey, thanked his industry colleagues in a tweet for being part of the film's launch. Sai Dharam mentioned screenwriter Vinayak Garu, Janatha Garage director Koratala Siva and of course NTR Junior in his tweet. "Thank you Vinayak Garu, NTR Junior and Koratala Siva for gracing us with your presence inspite of being busy team #Jawaan," he wrote in a tweet.


Thank you #Vinayakgaru@tarak9999 and @sivakoratala garu for gracing us with your presence inspite of being busy team #Jawaan .pic.twitter.com/IrC7FodX1B

Koratala Siva also shared best wishes for B V S Ravi and the Telugu actor. "Wishing my friend B V S Ravi and Sai Dharam Tej all the very best for their new movie. God bless them with loads of success," he wrote on Twitter. NTR Junior and Koratala Siva have collaborated for Telugu action-drama Janatha Garage. The Telugu movie also featured Samantha Ruth Prabhu, Malayalam superstar Mohanlal and Nithya Menen.
Sai Dharam Tej is related to the Telugu film industry through actors Nagendra Babu and Pawan Kalyan, whose nephew he is. He is currently busy filming two of his upcoming films Winner and Nakshatram, which also stars Sundeep Kishan. Meanwhile, NTR Junior was last seen in Janatha Garage and has a film called Jai Lavakusa in the pipeline.