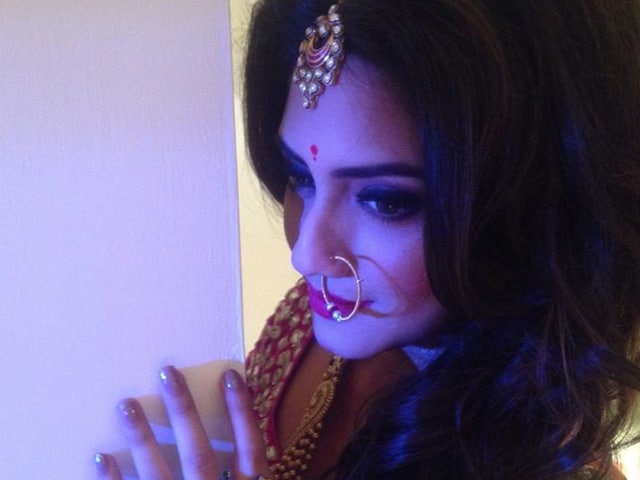 This image was posted on Facebook by Nusrat Jahan

Sandhya Namar Age star Nusrat Jahan feels that whenever she dons traditional attire she gets into the skin of the period character. The actress is reportedly playing a pivotal role in Kamaleswar Mukherjee's upcoming film Panch Pandava, which is a modern day interpretation of Mahabharata.
After grabbing attention as a show-stopper at a recent fashion show, Nusrat told PTI, "If I portray that character, such shows are helping me to get into groove. I love being attired traditionally, and this embroidered two-piece costume will take you back to the era of royals."
Nusrat, who still keeps fingers crossed about the biggest project of her career, rates Meghe Dhaka Tara maker Kamaleswar as one of the most brilliant directors she would love to work with.
Coming to the 'Head Turners Fashion show', said she loved the colour combination of magenta-wheatish and the heavily embroidered ghagra which automatically "bogs you down into past" and "you relished it." She added, "I feel so comfortable in the robes stitched by Amrita Mukherjee and it is very epical."
Nusrat was recently seen in a murder flick titled Sondhey Naamar Aagey, opposite Rahul Bose.
Internationally known hair stylist Amy Plowman said, "It was amazing to see 39 Indian models, all gorgeous looking women, sashaying the ramp on pool side and I like the different hair styles from texture look to glam look and bridal look flaunted by them. From short to long tresses Indian women flaunt beautiful hair which also compliments one's style," she said.