Pawan Kalyan Is Special To Work With, Says His Co-Star Shruti Haasan

Shruti Hassan said: "I'll always be grateful to Pawan Kalyan for giving me an opportunity to be part of the project. A star of his calibre could have easily said no to me" 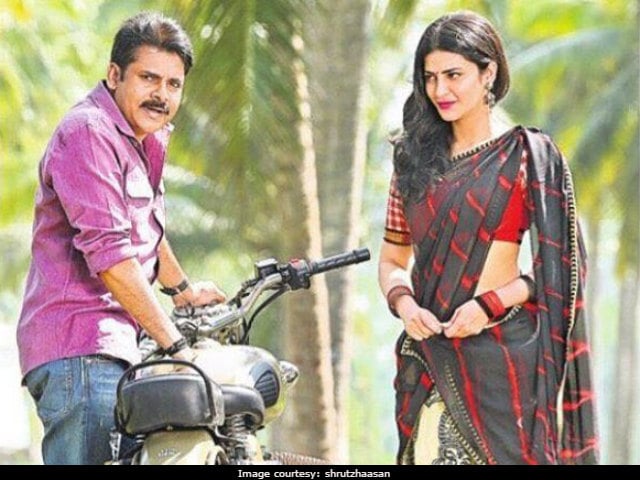 Actress Shruti Haasan, who is currently filming Katamarayudu, spoke to news agency IANS about her co-star Pawan Kalyan, opposite whom she had a big hit in 2012's Gabbar Singh, the Telugu remake of Salman Khan's Dabangg. "I'll always be grateful to Pawan Kalyan for giving me an opportunity to be part of the project. A star of his calibre could have easily said no to me. But he was very supportive and I'll never forget it," she said to IANS. Shruti, 31, reunites with 45-year-old Pawan Kalyan for Katamarayudu. "It will always be special to work with him," she told IANS.
Pawan Kalyan, brother of actor-politician Chiranjeevi and a massive star in the Telugu film industry, recently addressed Harvard Business School, speaking about how he dropped out of school and never wanted to be an actor as a young man. He began his speech with, "I started my education from street school. So, it is a little difficult for me to address a speech in Harvard," and was loudly cheered.
Katamarayudu is a remake of Tamil hit Veeram. Shruti resumed filming in Hyderabad earlier this week after returning from holiday, posting a tweet and a photo on Instagram:


Hello Hyderabad !! Back for the shoot of katamaraydu and looking forward to some super duper work today !

Back to work#makingmovies #workathon #hyd

Shruti Haasan, daughter of actors Kamal Haasan and Sarika, was last seen in SI3 opposite Tamil star Suriya. "The reception has been wonderful. The success of the Singam franchise is proof of how much people have enjoyed the series," she told IANS.
Critics of the film complained that Shruti's role contributed minimally to SI3, the third in the blockbuster Singam series of films. "I have nothing to complain about my role. You can't judge a role by its screen time or by the number of scenes. I was part of 'D-Day' for just 11 minutes but people loved it. Sometimes even if you happen to be part of a film from the first to last frame, there's no guarantee that people might like it," she said to IANS.
Shruti Haasan, seen in 2016's Hindi film Rocky Handsome, is also working on the films Sanghamitra, Behen Hogi Teri and her father's Sabaash Naidu, which keeps getting delayed.
(With inputs from IANS)