Pawan Kalyan's Harvard Speech: Was A School Drop-Out, Never Wanted To Be An Actor

Pawan Kalyan's Harvard Speech: he confessed that he was unable to concentrate on education as he was more focussed on social issues, and "successfully failed in exams." 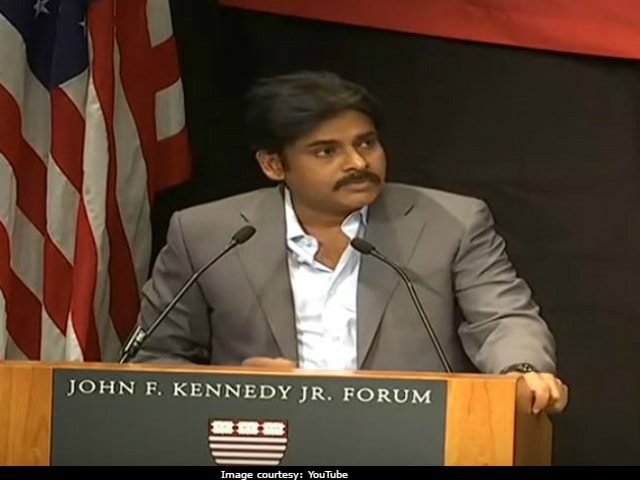 Telugu superstar and politician Pawan Kalyan addressed the students of Harvard Business School and Harvard Kennedy School in USA, as part of the student-organised conclave named India Conference 2017. The 45-year-old actor was greeted with loud cheers and applause from the audience, and he welcomed everyone with an introductory greeting in Telugu, which translates into: "My heartfelt salutations to all." As he switched to English, he said: "My heartfelt respects to the divinity within each one of you. Thank you a lot for inviting me. It's a privilege to be one of the speakers here." The actor also made a plea ahead of his speech: "I started my education from street school. So, it is a little difficult for me to address a speech in Harvard. So, you have to understand my situation."
The Attarintiki Daredi actor spoke about his parents - his father being a constable and mother a housewife - before mentioning that he spent a lot of time at home as he suffered from bronchitis. He narrated an incident from his childhood to highlight the difference spotted between "spoken words" and "reality", and added: "For me it has become a life-time obsession to see the gap between what has been said and what has been done."
Owing to his "obsession", he confessed that he was unable to concentrate on education as he was more focussed on social issues, and "successfully failed in exams." He said while his friends were getting admitted to universities abroad, he continued to fail exams and went into depression. "I wanted to commit suicide because for me it was such a painful situation," said Pawan Kalyan. He added that counselling from family members helped his cope with depression and later, he "experimented" with his career choices.
"Every individual is a product of time and environment. I never wanted to be an actor. I wanted to be a yogi. I wanted to be completely away from materialistic life," he said. Pawan Kalyan is the younger brother of South star Chiranjeevi and actor-producer Nagendra Babu. During his speech, he shared an incident when he successfully managed to annoy his brother with his words of wisdom. "Idiot! I agree with whatever you say but can you be the same person after creating something concrete and achieving something?" Pawan Kalyan was told.
The audience also clapped out loud when he said: "In India, law is applied weakly to the strong and strongly to the weak."
He also said how he was influenced by the opinions of celebrated economist Nanabhoy Palkhivala, who is his role model and inspired him to join politics. "The reason why I came into politics was because my generation doesn't know what is happening," he added. In 2014, Pawan Kalyan joined politics briefly as part of Jana Sena Party.
Pawan Kalyan, who also made revelations such as he had wished to join extremists like the Naxals, signed off saying: "I want India to be culturally integrated. Bharat mata ki jai!"
Video: Watch Pawan Kalyan's speech here: