Pragya Jaiswal tweeted the motion poster of Om Namo Venkatesaya and said, "Glad to be a part of this project" 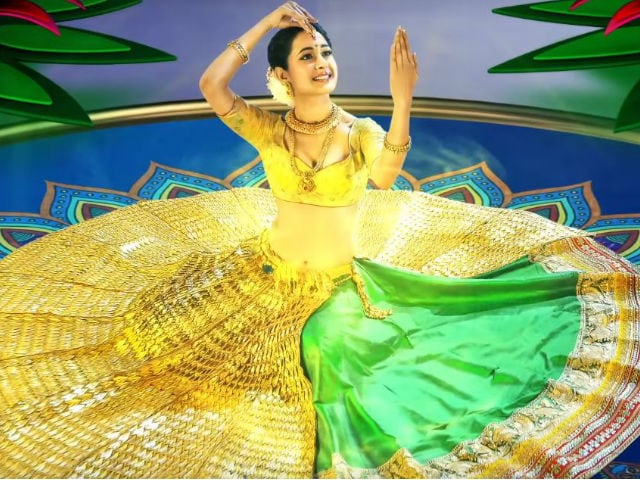 Actress Pragya Jaiswal's got our attention. On Tuesday, the 26-year-old actress tweeted her first look from upcoming devotional Telugu film Om Namo Venkatesaya, in which she co-stars with Nagarjuna Akkineni, Anushka Shetty, Saurabh Raj Jain and Vimala Raman. "And here's my first look from Om Namo Venkatesaya. Glad to be a part of this project," she tweeted, also posting the motion poster. But it was a hashtag she tweeted which intrigues us - #14kggoldlehenga. The focus has shifted to Pragya Jaiswal and it is quite spectacular. Pragya debuted in the 2014 Hindi film Titoo MBA and has since appeared in the Telugu films Mirchi Lantu Kurradu and Kanche.
Here's the first look pf Pragya Jaiswal in her gold lehenga (which certainly looks like it could weigh 14 kilos) in Om Namo Venkatesaya:

Om Namo Venkatesaya, directed by K Raghavendra Rao, is based on the life of Hathiram Baba, a devotee of Lord Venkateswara who set up an ashram near the temple of Tirumala in 1500 CE. The film is produced by A Mahesh Reddy under AMR Sai Krupa Entertainments banner. The film's music is composed by M M Keeravani.
Nagarjuna Akkineni will play Hathiram Baba. Anushka Shetty plays Krishnamma, a fellow devotee. Details of Pragya's role has not been revealed
. Meanwhile, the gold lehenga is not the only reason why Pragya Jaiswal found a top spot on the trends list on Tuesday. The motion poster of her film with Manchu Manoj, titled Gunturodu, is also making headlines. Pragya doesn't make an appearance in the motion poster, however, Manchu Manoj has a very strong message on love and war.