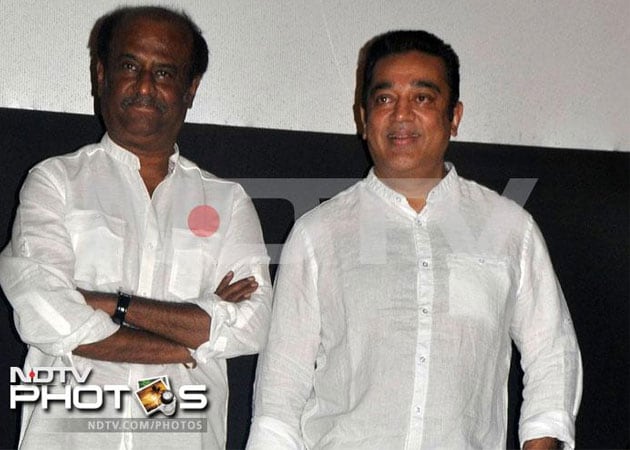 In what could be regarded as a major departure from the custom, Kamal Haasan is all set to view his friend and professional rival Rajinikanth's latest film, the long-awaited Kochadaiyaan.

In what could be regarded as a major departure from the custom, Kamal Haasan is all set to view his friend and professional rival Rajinikanth's latest film, the long-awaited Kochadaiyaan.
The film is crucial for Rajinikanth as it would be his first after his hospitalization two years ago.
The film adopts a new form of storytelling known as the Motion Capture technique where all of the Tamil superstar's actions would be heightened and amplified through special effects.
Understandably, Rajini is said to be anxious and has asked Kamal Haasan, known to have a deep comprehension of cinema, to step in to suggest changes. Only then will Rajinikanth decide on a release date.
"Rajini considers Kamal Haasan to be extremely cinema literate. He respects Kamal Haasan's judgement on cinema. Since this film is crucial (for him), he has asked Kamal to view the film," said a source from Chennai.
A suitable date for the screening is being arranged.
Speaking fondly about his friendship and rivalry with Rajinikanth, Kamal Haasan says: "I'd do anything he asks me to, no question of refusing him. Both of us were young actors who started from scratch. He was the bus conductor with acting aspirations. I was the clapper boy who got the clap in my very film (Kamal Haasan played a character with venereal disease in his first adult role).
"We didn't have fathers to make movies for us. But we had the same godfather K Balachander. We've done around 10 films together, most of them were hits, though we did have failures. We've done three films for our mutual mentor Balachander," he added.
Kamal Haasan also says he can never say 'no' to Rajinikanth.
"I've done guest roles in Rajini's films. It's quite strange, but our paths as actors were always intertwined. Initially we were both typecast as villains. I got fed up doing those and went away to Kerala to do Malayalam films. Then his career as a villain took off, and I returned to Chennai to pursue a career in Tamil cinema.
"We made our way up together. Rajini once pointed out that though he's four years my senior, I'm his senior professionally and that he would take my advice about doing a film with me, if there's an occasion for us to star together," he added.
Kamal Haasan doesn't rule out the possibility of doing another film with Rajinikanth.
"It depends. He said if we do a film together, he won't direct it. It has to be either me or someone else. It would be quite interesting to do a film with him," he said.