Rajinikanth Fever: 100 Shows of Kochadaiiyaan in This Theatre Today 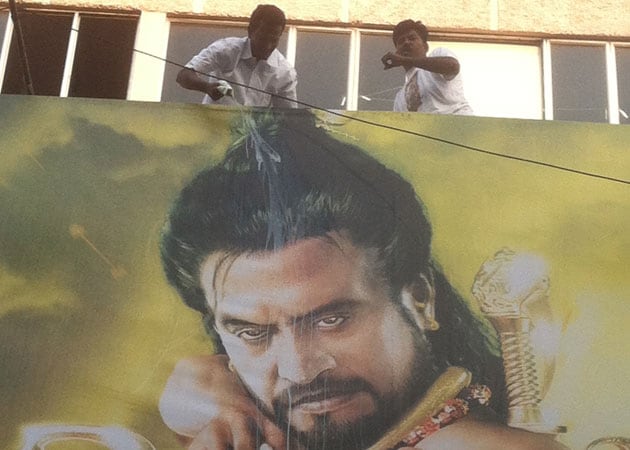 A still from Rajinikanth's Kochadaiiyaan

Superstar Rajinikanth's magnum opus Kochadaiiyaan's release may have got delayed, but it has failed to dampen the buzz surrounding the film with a leading multiplex planning 100 shows today.

Superstar Rajinikanth's magnum opus Kochadaiiyaan's release may have got delayed, but it has failed to dampen the buzz surrounding the film with a leading multiplex planning 100 shows today. (Also read: Rajinikanth Tweets 'Best Wishes' to Soundarya, Team Kochadaiiyaan )
Mayajaal, one of the leading multiplexes in Chennai,  is screening 100 shows across 16 screens today on the opening day.
"When Rajini's Enthiran released, we had 90 shows during the entire first week. Since Kochadaiiyaan happens to be a very special film, we have increased the total number of shows to 100. We will increase or decrease the number of shows based on the initial response," Meenakshi Sundaram, manager, Maayajal, told IANS.
Other multiplexes such as SPI Cinemas had already sold approximately 30,000 tickets in advance for the opening day.
"The tickets are sold out for the opening weekend. The pre-release buzz has been extremely positive and fans are eagerly waiting to catch superstar Rajinikanth on the screen. The film is likely to register a record opening," a representative of SPI Cinemas told IANS.
Directed by Rajini's daughter Soundarya R Ashwin, Kochadaiiyaan, India's first photo-realistic 3D animated motion capture film, is scheduled to release on 477 screens in the state.
Also starring Deepika Padukone, Jackie Shroff, R Sarath Kumar, Aadi Pinisetty, Nasser and Shobana, it will hit approximately 6,000 screens in 10 countries.
Meanwhile, Rajini's ardent fans are gearing up to celebrate the release of the film in the most extravagant way possible.
From visits to temples on the eve of the release to anointing large cut-outs of Rajinikanth with milk before the first show of Kochadaiiyaan, the fans are going out of their way to make it a memorable event.
Ranjith Solomon, a member of Rajinikanth's fans association, had already predicted that celebrations would start as early as 3 am on Friday. His prophecy came true - the supstars' fans thronged theatres since early morning and the fan frenzy was apparent, atleast in the city of Chennai.
"For the first show of Kochadaiiyaan, which will be at 4 am on release, we'll start celebrating from 3 am We'll decorate theatres with large cut-outs and posters of the Thalaivar (nick name for Rajini) the previous evening and kick start our celebrations next morning with a puja," Ranjith said.