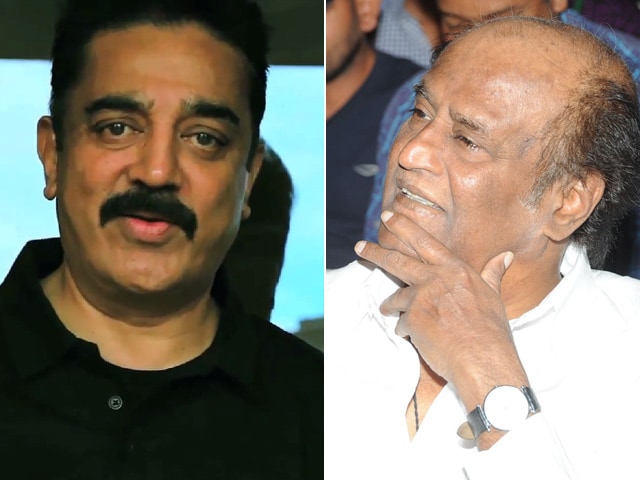 Kamal Haasan in a still from the video (left) and Rajinikanth at Lingaa music success celebration event.

Tamil superstar Rajinikanth is 64 today but Kamal Haasan, his colleague and friend of many years, has wished him a 'happy 44th birthday' via video

Tamil superstar Rajinikanth is 64 today but Kamal Haasan, his colleague and friend of many years, has wished him a 'happy 44th birthday' via video.

Before Rajini fans accuse Mr Haasan of being 20 years behind the times, let it be known that he is not. Kamal Haasan's Tamil language video message, posted on YouTube, is in response to Rajinikanth's birthday wishes for him last month. (Also Read: Rajinikanth's Lingaa Releases Today, Chennai is Beside Itself)

Kamal Haasan celebrated his 60th birthday on November 7 but was wished a happy '42nd' birthday by Rajinikanth, who told him that he looked no older than 42. (In Pics - Rajinikanth@64: A Tribute to Thalaiva)

Mr Haasan, it seems, is returning the compliment. (Also Read - Rajinikanth, Happy Birthday: 5 Things You Didn't Know About Him)

Rajinikanth and Kamal Haasan have co-starred in several films together - often as villain and hero - beginning with Rajinikanth's debut film, 1975's Apoorva Raagangal.

In his video message, Mr Haasan also says that he will watch his friend's new film Lingaa either in Los Angeles, where he currently is, or in Chennai when he returns.

Lingaa released today to much excitement in Rajinikanth's hometown Chennai. It co-stars actresses Sonakshi Sinha and Anushka Shetty. Here is a transcript of Kamal Haasan's birthday message for Rajinikanth: Hi Rajini, happy 44th birthday. Wish you grand success for Lingaa. I'm out of station in Los Angeles, so I am conveying my wishes by this method. Last month, you wished me a happy 42nd birthday. I have no answer for that. I think that our friendship maybe aged 42? So wishes for that too. I'll see Lingaa in Los Angeles or after I return to Chennai. Then I'll call you. Bye"