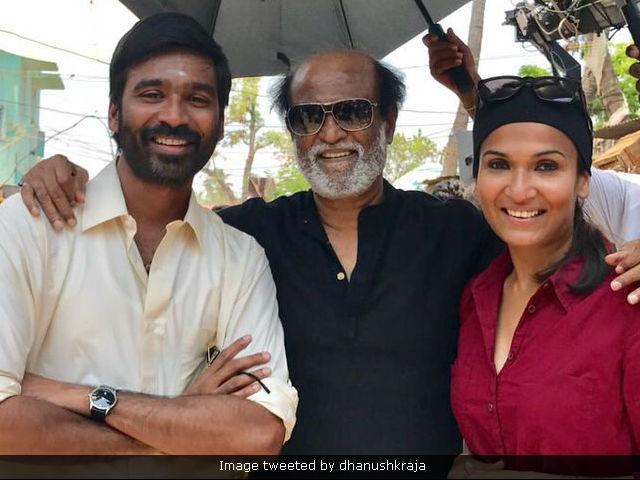 Dhanush, Rajinikanth and Soundarya on the sets of VIP 2. (Image courtesy: XYZ)

The shoot of Dhanush's upcoming film VIP 2 started after his father-in-law, superstar Rajinikanth gave a clap and three months later the film's shoot also wrapped in his presence. Rajinikanth was photographed on the sets of VIP 2, a sequel to Velaiyilla Pattathari. Dhanush shared the pictures on Twitter and wrote: "Wrapped shoot for vip2 today with our own thalaivar's blessings. Thank you @soundaryaarajni and @theVcreations sir for everything (sic)." Rajinikanth's elder daughter Soundarya has helmed the project which also stars Kajol. The Bollywood actress wasn't present on the sets as she wrapped her part some time back. The film is produced by Kalaippuli S Thanu.
Check out pics from the sets of Dhanush's VIP2:

Soundarya also shared pictures from the sets, one of which shows Rajinikanth sitting with Soundarya behind the screen and analyzing a scene with her.


It can't get better than this !!! The One and only #superstar my appa on set. Last day shoot for @dhanushkraja sir #VIP2@theVcreationspic.twitter.com/KJXKifJZ9O

The film went on floors in December and that too was in the presence of Rajiniknath. Soundarya had shared this:

Meanwhile, Kajol, who starred in 1997 Tamil film Minsara Kanavu, directed by Rajiv Menon and co-starring Arvind Swamy, is making a comeback to Tamil films after two decades. Kajol is also reportedly playing a grey character in the film. A source told news agency IANS: "She (Kajol) plays a suave businesswoman, and there will be different shades to her character. Her character is such that she will lock horns with Dhanush, but that doesn't qualify to make her the antagonist. Audiences are in for a surprise when they watch the film."
Kajol completed filming her portion earlier in March. Soundarya had tweeted: