2.0 First Look: Rajinikanth Vs Akshay Kumar Is Not For The Faint-Hearted

Akshay Kumar stars as Dr Richard in 2.0, who becomes eccentric after an experiment gone wrong. With feathers and darkened claws, Akshay's character has the burning eyes of a tiger and dark stripes on the forehead. Akshay Kumar in 2.0 first look is not for the faint-hearted 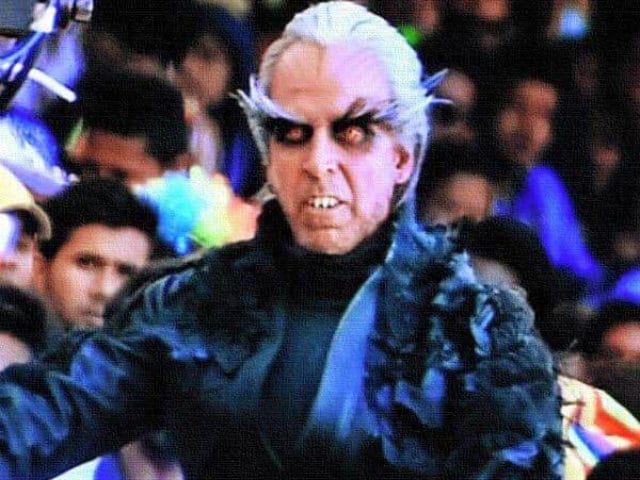 The wait for the first look of Tamil star Rajinikanth's next film 2.0 is finally over. The makers launched the first glimpse of Akshay Kumar as paranoid scientist Dr Richard on Sunday evening, sending social media into meltdown. Akshay stars as the antagonist, a scientist who becomes eccentric after an experiment goes wrong. With feathered eyebrows and darkened claws, Akshay's character has the burning eyes of a tiger and dark stripes on the forehead. Meanwhile, Lyca Productions, which backs the film and live-streamed the first look launch event, flashed a constant reminder: "The world is not only for humans." One look at the posters, and we cannot but believe it.
Here's how you will see Akshay Kumar in 2.0.
*Warning: Not for the faint-hearted*

The battle is on:

Rajinikanth means business and is set for the game:

2.0 is the sequel to Rajinikanth's 2010 blockbuster Enthiran, released in Hindi as Robot. The 65-year-old star reprises his double role of Dr Vaseegaran and his creation, Chitti the Robot.
In a tweet on Monday morning, Akshay responded to a comment on how stressful acting with prosthetics must have been by saying that the reactions to the first look of 2.0 made it all worthwhile. Here's a sample of said reactions:


What an Awesome! evil look brother@akshaykumarhttps://t.co/gtNILMElW7

Omg...Omg @akshaykumar this right away gave me the creeps..evil definitely has a new face and it's Brilliant..super excited #2point0. https://t.co/b4HeHptmFX

Eyes on everything! No escape from the Devil! @akshaykumar ... https://t.co/U2AD9efbKU

Meanwhile, surprise arrived in the form of Salman Khan at the first look launch of 2.0 in Mumbai, apart from superstar Rajinikanth, Amy Jackson and Akshay Kumar. Filmmaker Karan Johar hosted the event on Sunday. 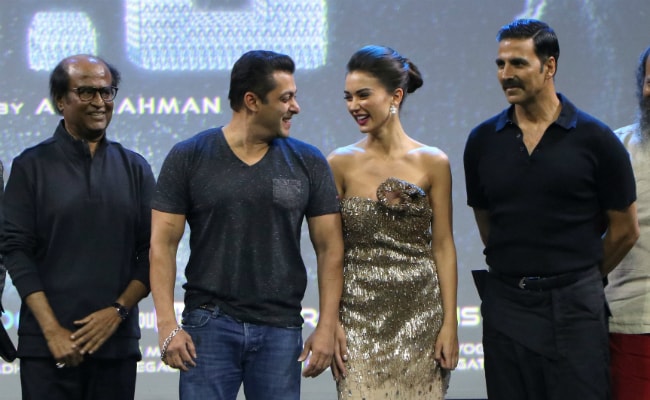 On Friday, Rajinikanth tweeted a teaser poster of the film, which also featured a silhouetted Akshay:

In addition to Akshay Kumar, Sudhanshu Pandey plays the villain in 2.0. Sudhanshu and Akshay are co-stars of films like Khiladi 420 and Singh Is Kinng. Sudhanshu, who plays Dr Bohra's (Danny Denzongpa in Enthiran) son, shared his experience of working with Rajinikanth. In an interview with iflickz, he said: "I'm a deeply spiritual person. The vibes I got in the presence of Rajinikanth sir, I cannot even begin to describe. I felt like hugging him, touching his feet and kissing his hands. He's a legend who is beyond all number and star games. On our first meeting, I went straight and touched his feet. He told me that Shankar sir had talked a lot about me to him."


Can't help posting another one... My heart is filled with pride.. I still am coming to terms with the humility of this man... the kind heart...and the purity of his soul is seen in his eyes... I'm blessed to have worked with him.. THE MAN THE CULT THE " RAJNIKANT" @robot2 @enthiran2 @akshaykumar @iamamyjackson JAI MAHAKAAL

Oscar-winning sound designer Resul Pookutty has been roped in for 2.0 and told news agency PTI: "Technically, the action in 2.0 is a high level of achievement. I went to the set and what I saw was amazing. I've gone through the narration and the previews. Next year most of my time will be invested in creating 2.0."
Directed by S Shankar, 2.0 also stars Adil Hussain while A R Rahman scores music for the film. 2.0 reportedly records a budget of Rs 350 crore and will release in three languages - Tamil, Telugu and Hindi - next Diwali.
Rajinikanth, 65, was last seen in July blockbuster Kabali. Akshay Kumar's Rustom released in August.
With inputs from PTI