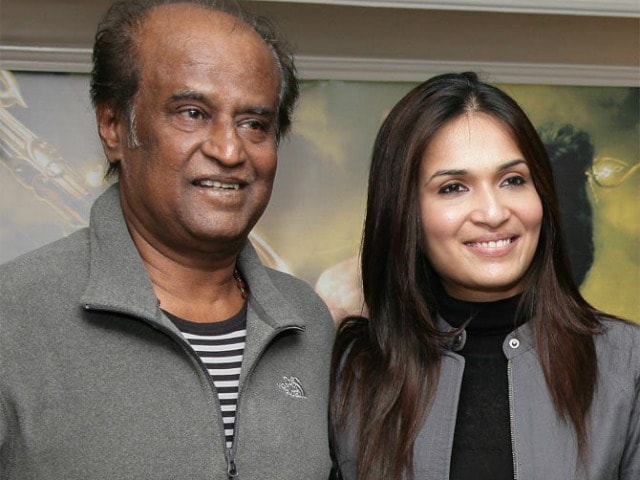 Megastar Rajinikanth's younger daughter Soundarya filed for divorce from husband Ashwin Ramkumar in a Chennai family court on Friday morning, reported news agency PTI. They have filed for divorce by mutual consent on grounds of difference of opinion. Soundarya married businessman Ashwin in 2010 and the two have been living separately for more than a year now. In September this year, Soundarya announced that she and Ashwin were ending their marriage. Soundarya, who started her career in the southern film industry as a graphic-designer, and Ashwin Ramkumar have a son named Ved. Soundarya is best known for directing her father in 2014 fantasy film Kochadaiiyaan.
Earlier this year, the press reported that Soundarya and industrialist Ashwin Ramkumar's marriage was on the rocks. Soundarya, 32, confirmed the news in a tweet in September, writing: "News about my marriage is true. We have been separated for over a year and divorce talks are on."
This is what she tweeted:


News about my marriage is true. We have been separated for over a year & divorce talks are on. I request all to respect my family's privacy.

Soundarya made her debut as director with Kochadaiiyaan, which starred Deepika Padukone and Rajinikanth in lead roles. Kochadaiiyaan, India's first motion capture 3D Tamil film, was admired for the technology used in its making. Soundarya has also worked in Tamil films such as Majaa, Baba, Sandakozhi, Chandramukhi and Sivaji. She is the founder and owner of VFX studio Ocher Picture Productions.
Soundarya has been named the Animal Welfare Board of India's ambassador to the film fraternity and has also been co-opted as a member of the Animal Welfare Board of India.
Soundarya's next project is the much talked about VIP 2, starring her brother-in-law Dhanush. VIP 2 is the sequel to 2014 blockbuster Velaiyilla Pattathari and will be made in both Tamil and Telugu. Kabali producer Kalaipuli S Thanu's V Creations will back the film. Dhanush is married to Soundarya's sister Aishwaryaa. Soundarya's VIP 2 will go on floors this December.
(With PTI inputs)