Rajinikanth's Kabali to be Shown Round-the-Clock in Mumbai Theatre

"All the seats for all the shows are fully booked," said theatre owner Nambi Rajan, who is usually clean-shaven but has sprouted a bushy grey-white beard in tandem with Rajinikanth's get-up in Kabali 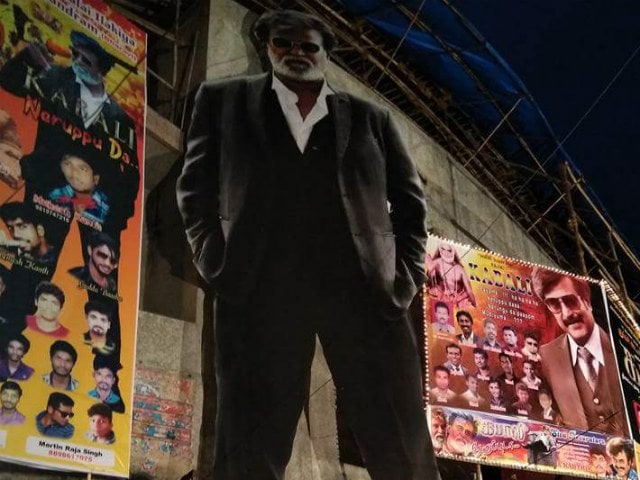 On the opening day of much-awaited Tamil film Kabali - Rajinikanth will be seen on the screen of a Mumbai cinema hall practically round-the-clock with six shows scheduled on the release day on Friday.
The 74-year old, 700-seater Aurora Theatre in King's Circle, a bastion of Tamils settled in Mumbai, will start shows right from 3 am and continue with shows at 6 am, 10 am, 3 pm and 6 pm with the last show at 9 pm.
"All the seats for all the shows are fully booked," said theatre owner Nambi Rajan, who is usually clean-shaven but has sprouted a bushy grey-white beard in tandem with Rajinikanth's get-up in Kabali.
The film's production team has already launched its on-ground promotions for Kabali from Tuesday in an open-top bus from Aurora Theatre attracting thousands of Rajinikanth fans.
In another first for Mumbai filmgoers, two gigantic cut-outs of Rajinikanth and a massive poster will be put up at the theatre entrance.
Rajan said that the entire theatre has been decked up to celebrate Kabali, including a fresh coat of paint inside and outside, a new screen, glittering clean ambience and shining lights.
After the inaugural day, the theatre will get back to its normal four-shows-daily regimen, for which it has reported heavy advance bookings.
The opening day itself will be a 'Thalaiva festival' with a huge procession of Rajinikanth fans after prayers at the famous Ram Mandir, a traditional band of huge drums, dancing and celebrations marking Kabali.
A theatre manager said that well known ophthalmologist S Natarajan of Aditya Jyot Eye Hospital - himself a die-hard Rajini fan - will conduct a free eye camp for all.
Rajinikanth fan clubs from all over Mumbai will organise blood donation drives at the cinema hall and the patrons will also contribute to various charities on the opening day.
Aurora Theatre, which was inaugurated in 1942, was one of the few good cinema halls exhibiting Hollywood films till the 1980s.
Rajan took over the theatre from its Parsi-German couple owners - Bejan Bharucha and Gertrude of the All India Pictures Pvt Ltd cinema chain - in the 1980s.
It was a predominantly Tamil pocket of central Mumbai and Rajan started to have at least one Tamil film show daily and the theatre became an instant hit with the local Tamil community.
Earlier, Aurora Theatre has shown films like Rajinikanth's Annamalai, Sivaji and Kamal Haasan's Thevar Magan.
Now, after Kabali, Rajan and his Aurora Theatre are keeping their fingers crossed for the next Rajinikanth release, 2.0 in 2017.