Rana Daggubati said: "Post Baahubali, everybody would have expected me to do a commercial film" 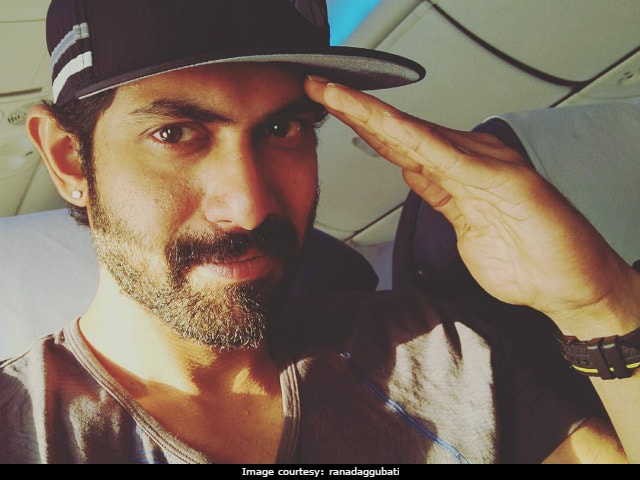 Actor Rana Daggubati will soon be seen in India's first maritime war drama Ghazi and he has Baahubali: The Conclusion lined up for April 28. The 32-year-old actor is best known for playing the tyrannical king Bhallala Deva in 2015's Baahubali: The Beginning, which achieved the status of a blockbuster after it released in July 2015 and continues to be one of the highest grossing South Indian films. Rana Daggubati revealed why he opted for a film like Ghazi after his Baahubali fame and said that he wanted to do something unexpected, reports news agency IANS. "Post Baahubali, everybody would have expected me to do a commercial film. But I chose Ghazi because it has an interesting story to tell. Although made as a bilingual and also dubbed in Tamil, this is a national film,' said Rana.
Rana Daggubati had to undergo massive physical transformation for his part in Ghazi. Talking about his transition from Baahubali's Bhallala Deva to playing a naval officer in Ghazi, Rana made a confession. "Bhallala Deva as a character is very tough to come out of, because it's so overpowering and larger-than-life. The challenge in Ghazi was to get my look right. When you watch both the films, you realise I don't look like the same person. I could only achieve it due to rigorous cardio training and then I had to do a lot of underwater training because the film features underwater sequences," he told IANS.
Rana also shared his experience of filming Ghazi, and said: "It was not an easy film to shoot. Initially, the idea felt so exciting. But until we started shooting, we didn't realise how challenging it was. You are inside a submarine for the longest time and you don't know the difference between day and night."
Rana Daggubati added: "After a month of shooting, I knew a lot of actors started to feel very claustrophobic. There were occasions when we didn't see sunlight for days together. This is when we decided to take a break and shoot other portions which happen on land."
Ghazi documents the story of Pakistani war-submarine PNS Ghazi's role in the Indo-Pakistan sea battle of 1971 and the mysterious sinking of the old submarine. Ghazi will also narrate the story of the naval officer, who guided his team of men to survive underwater for 18 days during the ongoing war. Taapsee Pannu plays the role of a refugee in the film, which also stars Atul Kulkarni and Kay Kay Menon.

Directed by Sankalp Reddy, Ghazi will hit screens on February 17. Rana Daggubati was last seen in Tamil comedy Bangalore Naatkal. Fans are also eagerly waiting for Rana to reprise his role as Bhallala Deva in the sequel of SS Rajamouli's magnum opus Baahubali this year. Apart from Baahubali: The Conclusion, films like Nene Raju Nene Mantri and Tamil war-film Madai Thiranthu are also in the pipeline for Rana.
(With inputs from Haricharan Pudipeddi of IANS)