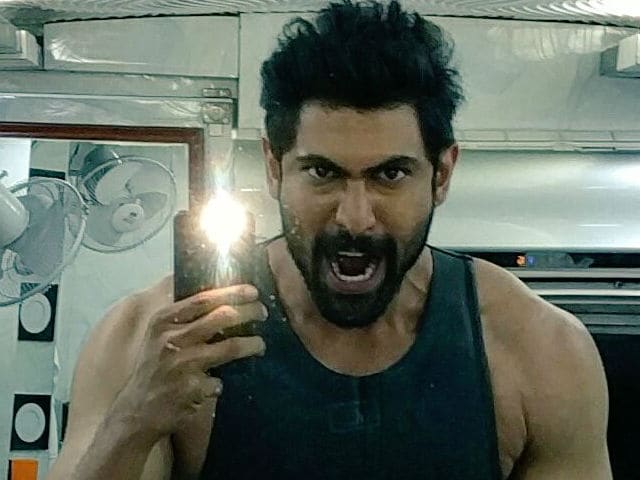 This image was posted on Twitter by Rana Daggubati

Rana Daggubati recently shot for a major underwater war sequence for Ghazi. Being a certified diver, he didn't require any underwater lessons for the film. "I am quite good at diving. It was shot over three days and required me to be underwater from six in the morning to two in the night"

Rana Daggubati, who plays a Navy officer in the trilingual Ghazi, touted as India's first submarine-based war film, has been shooting non-stop ever since the movie went on the floors in January.
The period drama revolves around the mysterious disappearance of Pakistan's premiere submarine, PNS Ghazi, near the eastern coast of India, en route to the Bay of Bengal, during the 1971 India-Pakistan war.
Rana recently shot for a major underwater war sequence for the film. Being a certified diver, he didn't require any underwater lessons for the film. However, he rehearsed a bit before the final shots.
Of the experience, Rana told IANS: "We began shooting on January 3 with the schedule drawing to a close on Tuesday. Two submarines have been created in a large pool in Hyderabad. I am currently on a 12-day break and will resume shooting from March 10 for a start-to-finish schedule." (Also Read: Taapsee Pannu Was 'Intrigued' by Ghazi Script)
"I am quite good at diving, but the last time I did it was around four years ago. It was shot over three days and required me to be underwater from six in the morning to two in the night. It was taxing but I was committed to giving it my best. The fact that it's a first of its kind movie motivates me to keep working hard," he said.
There may not have been heavy-duty physical preparation involved for the war drama, but Rana did have to lose a few kilos.
"I had bulked up for Baahubali, so I had to shed some weight. I also underwent agility training as part of my prep," he said. (Also Read: Baahubali: The Conclusion is on Track, Says SS Rajamouli)
The trilingual, which is directed by Sanklap Reddy, is being shot in Hindi and Telugu and will be dubbed in Tamil.
The actor's research also involved meeting Indian Naval officers, particularly those on board the Indian naval ship.
"My father helped me get in touch with many of them including those on INS Vikrant at the time," he added.